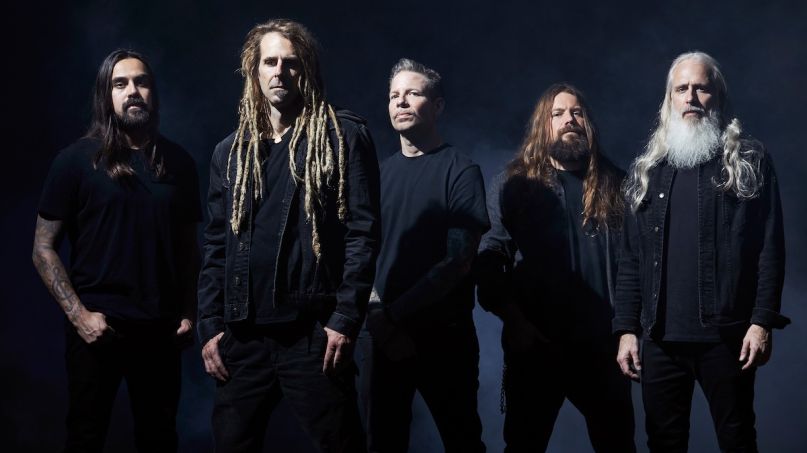 Lamb of God will release their first album in five years this spring. The self-titled LP is due out on May 8th. Below, you can hear the first single, “Checkmate”.

Lamb of God is the veteran metal act’s first to feature drummer Art Cruz, who permanently replaced longtime member Chris Adler last year after filling in for him on tour. The rest of the lineup — singer Randy Blythe, guitarists Mark Morton and Willie Adler, and bassist John Campbell — have each been in the band for more than 20 years.

The self-titled effort is the Richmond, Virginia outfit’s eighth album as Lamb of God, and ninth if you count the 1999 LP released when their band name was Burn the Priest. As for the decision to release an eponymous album a quarter century into their career, Blythe said, “Putting only our name on it is a statement. This is LAMB OF GOD. Here and now.”

Regarding the first single, guitarist Mark Morton stated, “‘Checkmate’ brings together all the components of the Lamb of God sound that we’ve been developing over the last two decades, but with the ambition and ferocity that comes with the start of a new chapter for our band. Re-energized and reignited, this is Lamb of God 2020. We’ve never been more excited.”

The band teased the song “Checkmate” earlier this week, with imagery that suggested political overtones in the track. Blythe has been an outspoken opponent of Donald Trump, and the lyrics read as a powerful attack on the president: “A coup de tat on full display, a liar’s sick charade/ A traitor’s grand parade/ Narcissistic masquerades for those without a say/ Systematic disarray.”

The song continues, “Divide and conquer and close them in/ And bury secrets deep/ Make America hate again/ And bleed the sheep to sleep.”

The video for “Checkmate” can be seen below, while the self-titled Lamb of God album is available for pre-order now. The album artwork and tracklist appear below, as well.

Lamb of God will celebrate the album announcement and new single with a free show at the House of Vans in Chicago on February 14th. For entry, fans can RSVP here beginning at noon CT today (February 6th).

The band will then embark on a spring European tour with Kreator and Power Trip, and will return to the States to play the Welcome to Rockville festival in Daytona Beach, Florida, on May 9th. See the dates below, and pick up tickets here.

Previous Story
A History of the Sympathy Oscar (and How The Academy Can Stop Saying Sorry)
Next Story
Album Review: Green Day Leave the Revolution at Home on Father of All Motherfuckers
Popular
More Stories
[fu-upload-form form_layout="media" title="Submit Your Photo"][input type="hidden" name="ugc" value="1"][/fu-upload-form]