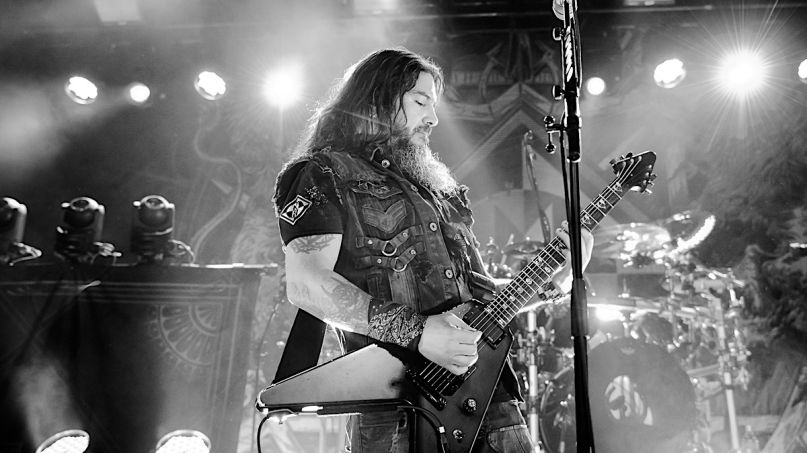 Don’t expect any roses or heart-shaped boxes from Machine Head. The thrashers just released the self-described “anti-Valentine’s Day” song “Circle the Drain”, along with a 30-minute documentary about the making of the track.

The song is partly inspired the exits of guitarist Phil Demmel and drummer Dave McClain from Machine Head in 2018. Frontman Robb Flynn also drew from recent personal experiences — the separate divorces of two friends — when writing the obvious breakup song.

Always openly honest, Flynn continued: “It was a strange parallel with my life at the time, having recently had two band members quit, and even more bizarrely, two long-time couple friends of my wife and I, also divorced. It was breakup season, and it played out with friends taking sides, people not being invited to certain events anymore, social and emotional pressure, and all the typical stuff that happens when a relationship goes bad.”

Flynn worked with drummer Navene Koperweis on the recording, which is co-produced by Flynn and Zach Ohren. It’s the second in Machine Head’s pseudo “singles series” following “Do or Die” last year. At that time, Flynn declared the band would release a steady stream of singles instead of a full-length album.

Machine Head are currently on tour for the 25th anniversary of their debut LP, Burn My Eyes. The show features two Machine Head sets, one featuring classic members and another with the band’s new everyday lineup. As Heavy Consequence can attest from catching their recent New York City show, it promises over two and half hours of Machine Head. Pick up tickets here.

Listen to “Circle the Drain” and watch the two-part “making of” documentary below.