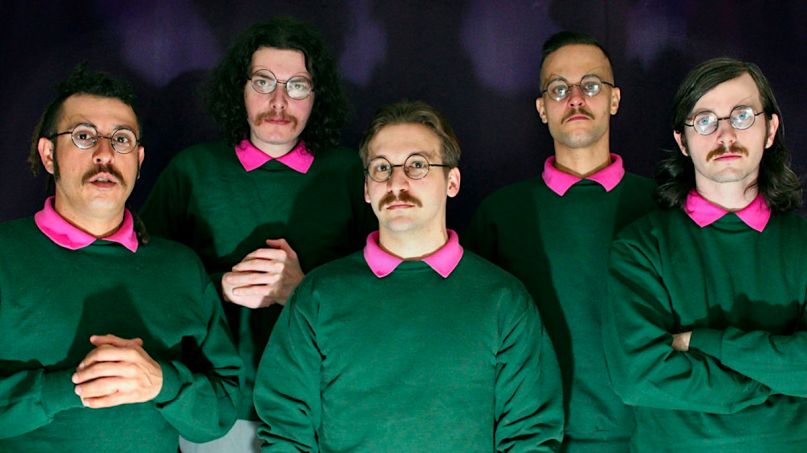 Okilly Dokilly, the metal act inspired by The Simpsons character Ned Flanders, have announced a spring US tour. The world’s only “Nedal” band has also released a brutally-doodily new song titled “Slaughterhouse”.

The trek, dubbed “When the Comet Gets Here Tour”, kicks off April 3rd in Phoenix, Arizona, and runs through a May 9th show in Austin, Texas. A special guest is slated to be announced shortly.

Okilly Dokilly’s Head Ned stated, “We’re exci-diddly-ited to announce the ‘When the Comet Gets Here Tour.’ The apocalypse may be looming over us, like a drooling Homer over a box of donuts, but that’s no reason to lose all hope. Some hope, but not all hope. So grab your green sweater and what remaining hope you have left and come rage with us Neds. End times are always better as Ned times.”

The new song “Slaughterhouse” was intended for the band’s 2019 album, Howdilly Twodilly, but was left off the LP when Head Ned noticed that he quoted Ned Flanders incorrectly in the lyrics. “Just before we sent the record to press, while doing an editorial check, I realized the quote was originally written down wrong,” explained Head Ned.

He added, “We immediately pulled it from the record. After a re-record in December of 2019, ‘Slaughterhouse’ was ready to go. ‘Slaughterhouse,’ at its core, is a song about gratitude, and us Neds sure do have a lot of gratitude for all the Neighborinos who came to our shows last year.”

Check out the song “Slaughterhouse”, as well as Okilly Dokilly’s tour dates, below. Tickets are available via Ticketmaster and through local venues. You can also pick up tickets here.