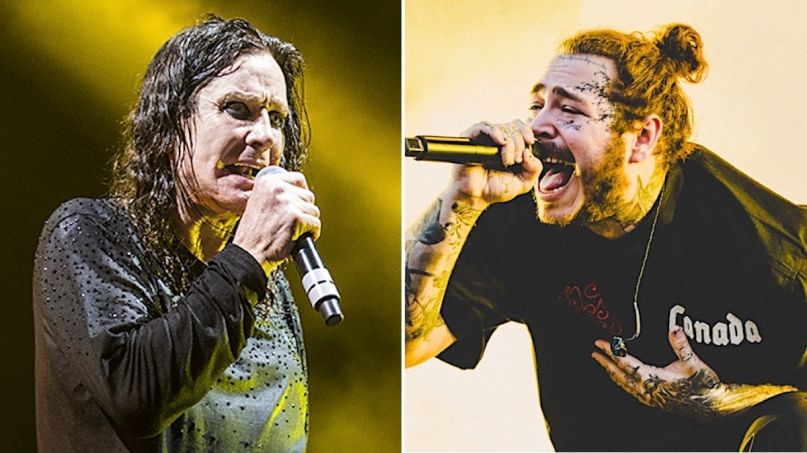 Ozzy Osbourne and Post Malone have released their second collaborative song, “It’s a Raid”. It follows their previous single together, “Take What You Want”. Both songs will appear on Osbourne’s new solo album, Ordinary Man, which is out Friday (February 21st).

The collaborations between Osbourne and Post Malone were centric to the making of Ordinary Man. Osbourne’s contributions to “Take What You Want”, which also appeared on Post’s most recent album, Hollywood’s Bleeding, led to further work with Malone’s producer Andrew Watt, who ended up producing and playing guitar on Ozzy’s new album.

“Take What You Want” technically originated as a Post Malone song featuring Ozzy, so the rapper returned the favor by guesting on “It’s a Raid”, adding some vocal accompaniment.

The track’s subject matter is autobiographical, with Osbourne telling SiriusXM about the time Black Sabbath were literally raided by police while working on Vol. 4 in 1972 in Bel Air, California. Police swarmed the band’s house after Osbourne accidentally hit an alarm. Meanwhile, there were piles of cocaine and marijuana laying about.

“I’m shouting, ‘It’s a f**king raid,” Osbourne said, as he swept the cocaine into a container and went to the bathroom to consume it until the cops left. “I’ve got coke coming out of my f**king ears! I didn’t sleep for four days after that.”

Sadly, Osbourne won’t be immediately touring in support of the album’s releasing after canceling his 2020 North American dates to seek treatment for Parkinson’s disease. The singer recalled the “worst f**cking year” of his life in a recent tell-all interview. “Am I happy now? No,” Osbourne said. “I haven’t got my health.”

As of now, Osbourne is still set to tour Europe with Judas Priest this fall. Get tickets here, and listen to “It’s a Raid” below.