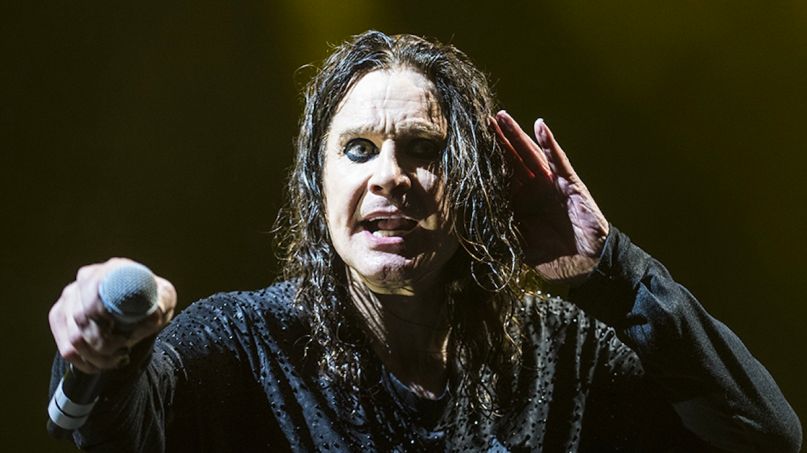 In a new interview, Ozzy Osbourne detailed the past year of his life dealing with copious health problems. The legendary singer just canceled his 2020 tour to seek treatment after revealing he’s battling Parkinson’s disease.

“When all I’ve got is this to live with, my head, it’s not fun, man,” Osbourne told Kerrang!. “It never tells me, ‘It’s a sunny day, let’s go sunbathing.’ It goes, ‘There’s a black cloud.’ [My wife] Sharon always says to me, ‘I don’t get you. You can have a blue sky, and you won’t be happy until you find that black cloud.’ That’s me! So you can imagine what I’m like when I’m lying on the f**king bed feeling sorry for myself going, ‘I’m dead, I’m finished, it’s all over.’”

It’s certainly been a tough stretch for Ozzy. Dating back to late 2018, Osbourne dealt with a string of unfortunate health issues, including a staph infection and pneumonia. Then, in early 2019, he suffered a nasty fall at home, dislodging metal rods that were inserted in his body years earlier as the result of an ATV accident. All of his 2019 tour dates were postponed as he spent most of the year recovering.

“I fell over, and bashed my head as I went down,” he said. “And I lay there thinking quite calmly to myself, ‘Well, you’ve really f**king done it now.’ I went to the hospital and they found this thing in my spine. In your spinal cord, each bit has fluid round it, but it was all pinched and the fluid wasn’t getting to it. I was in f**king agony.”

He continued: “I got a staph infection in my thumb. Fixed that. Then I had the accident. Then I came out of that and I got pneumonia. That didn’t go away. I thought, ‘Why don’t you just f**king kill me?’

“When I was laid up, my day to day was: I’d get up, take my blood pressure, take my temperature – I had a nurse 24 hours a day, seven days a week, for over a year,” he said. “I couldn’t walk. It’s only in the past five months I’ve been walking again. I can’t describe how it was. You never know what you’ve got until you’ve nearly lost it. You can imagine what it’s like for someone like me who’s always got to be doing something. A day for me doing f**k all is a life prison sentence. I mean, you’re just lying there feeling f**king dreadful.”

In the interview, Osbourne also discussed the making of his new album, Ordinary Man, which is out on Friday (February 21st). The no-pressure approach to the recordings helped him through the pain and malaise of illness.

As Ozzy told it, the album was created spontaneously between himself, producer and guitarist Andrew Watt, bassist Duff McKagan of Guns N’ Roses and Red Hot Chili Peppers drummer Chad Smith. The group would meet, jam, and Osbourne would take the recordings home to come up with lyrics.

“We’d bounce the f**king melodies around until something came up, and we’d just go with it,” Osbourne said. “It was fun. And it was so f**king good to be doing something. Because I’d be lying in bed going, ‘That’s it, I’m never gonna walk again,’ and this got me doing something and feeling good. And it was simple, it felt more like recording a f**king jam session.”

As far as his current mindset, Ozzy said, “Am I happy now? No. I haven’t got my health. That thing knocked the shit out of me, man, but I’m still here. In fact, I worried about [death] more when I was younger than I do now. I just try to enjoy things as much as possible, even though that’s so f**king hard sometimes.”

Osbourne’s 2020 North American tour, which had already been rescheduled from last year, was canceled earlier this week,  as the singer will seek medical treatments in Europe. He’s still slated to tour Europe with Judas Priest this fall.