Axl Rose and Billy Corgan, together at last 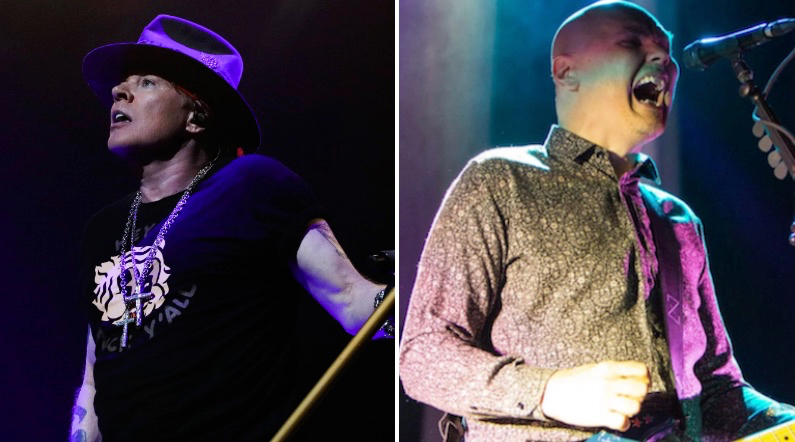 Guns N’ Roses have recruited Smashing Pumpkins to open a select number of dates on their upcoming US stadium tour.

The Billy Corgan-led outfit will join GNR for six shows, starting with their July 8th gig in Philadelphia. The two rock bands will also share the bill for shows in Detroit, Toronto, Washington, DC, E. Rutherford, NJ, and Boston.

Though they have never before toured together, GNR and Smashing Pumpkins of course share a similar story. They both are led by a headstrong, at times, cantankerous frontman, whose personality led his fellow bandmates to depart at the height of his band’s fame, only to later make amends with them and reunite for a tour. Axl Rose reconnected with Slash and Duff McKagan back in 2016, and they’ve remained on the road ever since. Meanwhile, Corgan reunited with James Iha and Jimmy Chamberlin in 2018 and went on to record a new album in addition to touring.

Corgan previously expressed his admiration for Rose in a 2017 interview with Joe Rogan. “When I look at Axl Rose, I see a free person. “I love that about Axl Rose. I love that he doesn’t give two fucks about anything. I think that’s so fascinating. Because there are only a few American iconic artists that are truly free.”

Tickets for Guns N’ Roses’ US stadium tour officially go on sale Friday, February 7th. You can get tickets to all of their upcoming dates here.

Check out Guns N’ Roses’ complete tour schedule below. Prior to their North American leg, the band will play shows in Latin America, the UK, and Europe.

By the time Smashing Pumpkins link up with Guns N’ Roses, they may have a new album to promote. Corgan recently said the band is planning to release a double album later this year. He went on to call the as-yet-untitled LP “the first real album” since the band’s reunion because they “hunkered down and made a classic ‘Let’s throw it all at the wall and see what happens’ type of Pumpkins record.”

Guns N’ Roses have also expressed a desire to record new music, but recently Slash admitted he was “not really sure” how or when the band will do so.