The first single from the group's new album Project Regeneration Volume 1, out May 29th 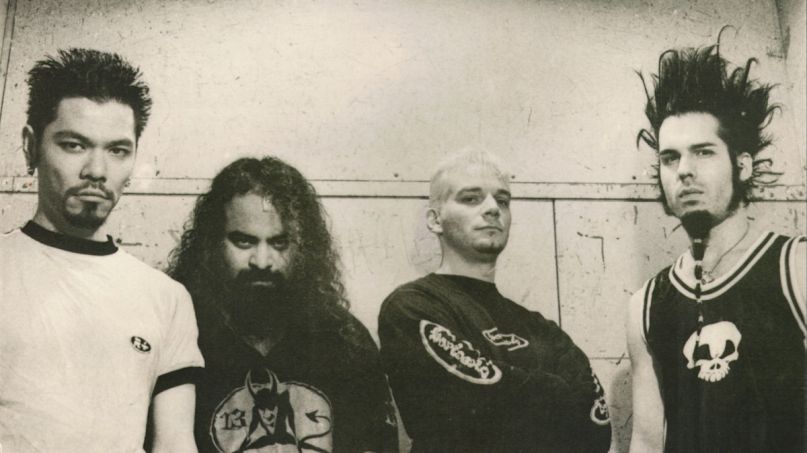 Static-X have unveiled the new song “Hollow” featuring vocals by late frontman Wayne Static. In addition, the band has revealed that they will now release two new albums, instead of one. The first, Project Regeneration Volume 1, will arrive this spring.

Originally set to be released last year, Project Regeneration was slated to feature guest vocalists performing with the group’s surviving original lineup — bassist Tony Campos, drummer Ken Jay, and guitarist Koichi Fukuda. However, plans changed when a number of unreleased Wayne Static vocal tracks were discovered during the recording sessions. As a result, Wayne Static’s vocals will be featured throughout the Project Regeneration albums.

The song “Hollow” is an aggressive industrial metal track featuring powerful vocals by the late Static, who died in 2014 from a lethal mixture of prescription drugs and alcohol. The music video shows the band playing alongside a metallic skeleton figure, representing Wayne, as it mouths the words of the song.

Regarding the track, Tony Campos stated, “This song was originally a demo from the Start a War album, which was never completed. Wayne and I never felt like the music on the original demo was fully realized.”

He added, “The vocals sounded great, but some of the musical compositions from that time period felt a bit experimental. There is a reason that some of these tracks never made it on a previous Static-X album, and it certainly wasn’t because of Wayne’s vocals.”

Static-X will unleash Project Regeneration Volume 1 on May 29th, with plans to release Volume 2 not too long after. Together, the two albums will contain a total of more than 20 brand-new unreleased tracks, featuring previously unused vocals by Wayne Static.

In 2019, Static-X embarked on an extensive tour to celebrate the 20th anniversary of their debut album, Wisconsin Death Trip. A mystery singer wearing a mask in the likeness of Wayne Static was enlisted to front the band. Along with the new song and album details, Static-X have also scheduled a 2020 tour of Europe, as well as a handful of one-off US gigs.

See the video for “Hollow” below, followed by the album artwork and tour itinerary. Project Regeneration Volume 1 is available for pre-order, while tickets to Static-X’s shows can be picked up here.