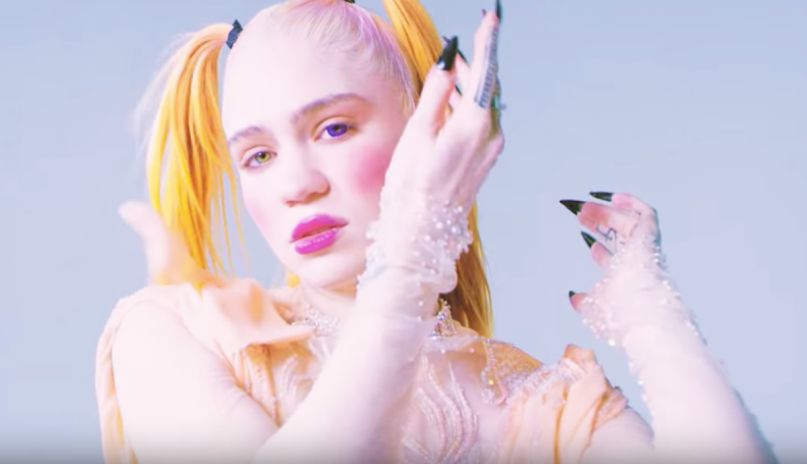 Grimes in the "Idoru" music video

Grimes has shared a new music video for “Idoru”, the closing track to her latest album Miss_Anthrop0cene.

Fans of the Miss_Anthrop0cene (Deluxe Edition) are already familiar with two versions of “Idoru”, the standard seven-minute cut and the shorter “Algorithm Mix”. Well, Grimes has chosen to release two videos for “Idoru” of different lengths, but they don’t actually correspond to the songs on the album. Instead of “Idoru – Algorithm Mix” at 4:47, she has now released “Idoru (Slightly Shorter Version)” with an additional thirty seconds of music. And the newly-released “Idoru (Slightly Longer Version)” comes in just south of seven minutes, shaving twenty seconds off the original. Got it?

In an Instagram post, Grimes said she hadn’t originally intended to release a video for “Idoru”. The visuals came out of a “weirdly emotional” camera test.

“technically this was a camera test that ended up being a weirdly emotional performance so .. don’t expect the fanciest visual ever haha, but we noticed “Idoru” has become a fan favourite and I wanted to express my appreciation to y’all. This has been by far the most rewarding album release wk of my life/ career etc. not a day goes by where I’m not overwhelmed w gratitude that my passion is my work.”

Check out the long and short of “Idoru” below.

Grimes is currently pregnant with the baby of billionaire Elon Musk, and a few weeks ago she released a pretty wild pregnancy makeup tutorial. As for Musk, he seems to think musical talent is sexually transmittable, and recently released his debut song “Don’t Doubt Ur Vibe”.