The drummer's new covers album, These Grey Men, is out now 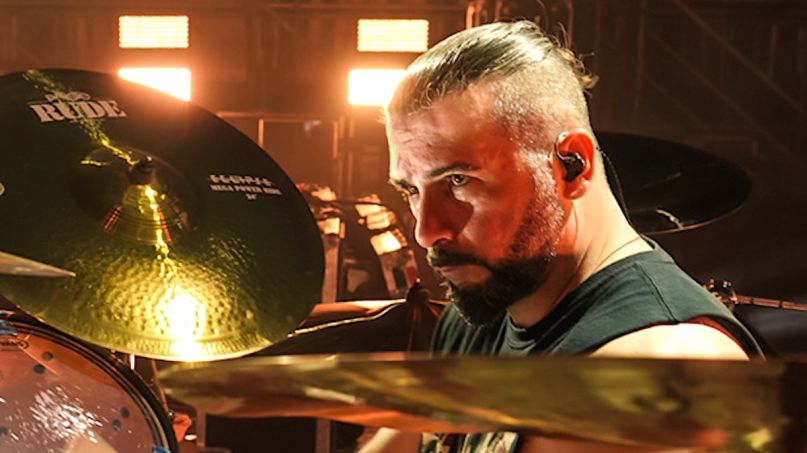 System of a Down drummer John Dolmayan has just released a new covers album titled These Grey Man. On the effort, he takes on the daunting task of covering songs by such iconic acts as David Bowie, Radiohead, Madonna, and others.

Dolmayan recruited such guests as his System of a Down bandmate Serj Tankian, Rage Against the Machine guitarist Tom Morello, Avenged Sevenfold singer M. Shadows, and more for the eight-song LP. The album was mostly recorded at Dave Grohl’s Studio 606.

Heavy Consequence caught up with Dolmayan to discuss the album. The drummer spoke about his approach to tackling such well-known songs, and trying to make them his own. He admitted that the long wait since System of a Down released their last album was one of the motivating factors in heading into the studio to record the album.

While he expressed his respect for Bowie, Talking Heads, and Radiohead — all acts he covers on These Grey Men — he added he’s not the biggest Madonna fan, but told us why he ended up covering one of the pop star’s songs.

Stay tuned for the second part of our interview, in which the drummer addresses the current state of System of a Down. For now, read Part 1 of our interview with John Dolmayan and stream These Grey Men below. The album is now available from various online outlets.

I would say so. A lot of it was, of course, some of it was just purely for the enjoyment of it, but I think that to say that it was borne out of frustration is not a false statement. It kind of morphed into something further than that. But, yeah, I would say that’s true.

No, not for me. I don’t think in those terms. You can call it egotistical or bold or whatever you want to, but I just never really consider that type of stuff in general in my life. I always played music that I had a respect for and passion for and if other people didn’t, it didn’t matter to me. There’s two ways of approaching a cover. You can do it exactly or as close to the original as possible, which is something I don’t enjoy. Muse did a cover, I think it was a Duran Duran cover [“Hungry Like the Wolf”] and I bet somebody money that it was Duran Duran and not a cover, and I lost. I don’t know why they would bother doing that. I’m sure they have their reasons, but why do a cover and make it sound exactly like the original. You have the original.

But when you change the cover, of course, then you’re going to be under scrutiny, and people who loved those songs … I’m sure all across the board, every single one of the songs that I cover has people that love it, obviously, including me. They’re going to compare it to it. They’re gonna say it sucks. A lot of people will. But I go about my day thinking about what I think of things as opposed to what everybody else does. And that’s how you stop from going insane.

Stylistically, Serj brought out probably the most System-y thing he’s done in a long time in [“Starman”]. It was reminiscent of stuff he would have done on Toxicity — quirky; you don’t know why it’s there; you don’t know if you’re supposed to like it or not like it; but it makes you smile — that type of stuff.

[“Starman” and “Road to Nowhere” are] really good songs, very well written, great melodies — incredible artists, in general. I just felt like Serj’s tone fit those songs. Originally, he was going to just do “Starman”, but I felt he was perfectly suited for “Road to Nowhere”. So I convinced him to do “Road to Nowhere”, as well. I just think his tone is perfect for it. Serj probably could have done every song on the album, quite frankly. But then that would have kinda gone away from what I wanted to do.

As a footnote, there were a bunch of artists that I really wanted for this album who either didn’t want it to do it or didn’t respond or couldn’t do it. So there could have easily been 14 tracks ’cause I kinda picked songs for artists, for vocals, and didn’t work out for whatever reason. But those two in particular I had earmarked for Serj.

Well, I’ve known Tom Morello for decades now, and you will never have two guys who think more differently than me and Tom Morello on a lot of subjects. But what a sweet and humble person and a caring person. And our relationship shows that you can be completely different politically minded people and still have a lasting and great relationship. I guess the same can be said about Serj, but he’s stuck with me — I’m in his band. He’s also my brother-in-law. So the dichotomy is a little different, but with Tom, the reason we have a relationship and a friendship is purely because we make the choice to. As far as his guitar playing, here’s a guy that can play with anybody — everybody from Rage Against the Machine to [Bruce] Springsteen. So he’s all over the place as far as his abilities and his talents. He’s truly a good guy who cares about people and trying to make a difference. He’s wrong about almost everything [laughs], but he’s doing the best he can anyway.

And M. Shadows is one of the nicest people that I’ve met in the music industry. I personally think a lot of the music industry is full of pretentious people, especially when it comes to vocalists. And here’s a guy who is the complete opposite, willing to work on anything … will strive to make things better, will continue to be a perfectionist, and is just altogether a really humble and nice person, as well. A great experience with both of them. I would absolutely in a second reciprocate if they wanted my talents for anything they ever did. And I might even do something again, you never know, maybe another cover or if I can produce an original, I do have some song ideas that are original, as well. And working on this album actually opened that up for me a little bit, in that I got the confidence to kind of explore that more than I had in the past.

When I heard “Hung Up” originally back in the day, I was attracted to [the sample of ABBA’s “Gimme! Gimme! Gimme!”] in the song. Madonna’s lyrics are juvenile at best and her music is kinda just like forgettable. I’m not being very complimentary of Madonna, who has a massive career, and is talented, but I dunno, she just doesn’t do it for me. I like “Las Isla Bonita”, I guess, that’s a good song.

But back to this song, the way she used that melody was brilliant and her otherwise mundane lyrics did sound good in that song. Wow, I’m really coming down on Madonna for some reason today. You caught me on a bad day. So, if Madonna ever reads this, which I don’t think she gives two shits, forgive me, it’s a bad day for my review of her career. But other than that, she did a good job with that really cool melody line. And that’s kind of what attracted me to the song. And then I had to change the lyrics, not because my lyrics are genius, but hers were really bad. So we got rid of her lyrics for the most part, and I had to put something substantive in this song, otherwise it was just going to keep doing the same thing over and over again. And that’s where the Neil Young [Crosby, Stills, Nash & Young] song comes in. You go from kinda mundane lyrics to just poignant, deep moving melody and lyrics, and nobody better at that than Neil Young.

I don’t think it’s out of the realm of possibilities getting everybody together. It will take a lot of effort, and I would consider doing it, but only if I did it in a really special way. In other words, it wouldn’t just be us playing the songs. There would have to be an orchestral contingent to it because I programmed a lot of the orchestral stuff along with an engineer that helped me on it. That was a lot of fun, and to have that played by real instruments would be really cool. I realized how much I love the violins and cellos and just incredibly beautiful instruments. So I would have to do it like that. Plus, we’d have to have something really cool visually. So if I could put all that together and it wouldn’t break the bank, I would definitely consider doing, I’d probably be more open to it after the next [System of a Down] tour, when I have a little more cash in the bank.

Our thanks to John Dolmayan for taking the time to speak with us. Stream These Grey Men via Spotify and Apple Music below, and order the album at this location.