There's a scene in which O'Brien smashes Oberst's guitar to pieces 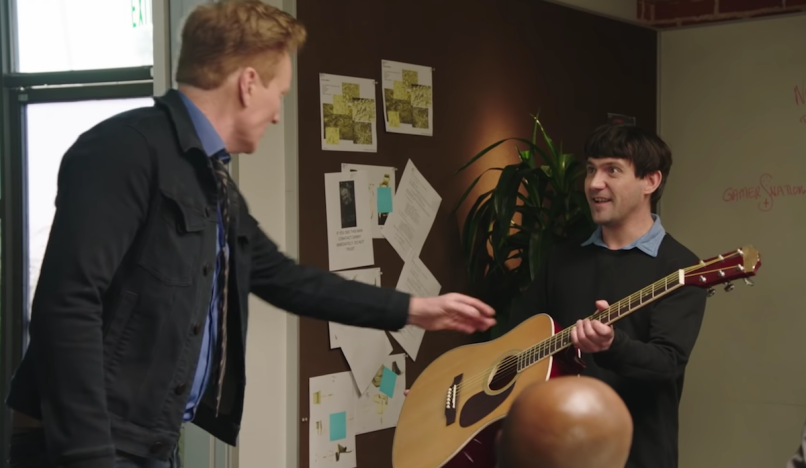 When Conor Oberst isn’t busy bringing back Bright Eyes, he apparently serves as a production assistant on Conan alongside his fellow Better Oblivion Community Center bandmate Phoebe Bridgers. That is, according to the funny new mockumentary-style series Meet the Conan Staff.

The latest episode stars both Oberst and Bridgers as two very different kind of employees. Oberst is the more upbeat staffer, perpetually grateful for the opportunity and always happy to help. He also never expects to be given special treatment just because of his celebrity status.

“I sort of stumbled into the role of being the voice of the emo and indie rock movement,” Oberst says at one point. “But that was just to pay the bills. Really, I wanted to break into late-night television production. I guess you could say I’m the Happy Gilmore of emo.”

Although he tries to remain low-key about his fame, Oberst loves — almost obsessively so — to break out into song whenever he can, to the dismay of his coworkers. At one point, Conan O’Brien even takes Oberst’s guitar and smashes it into pieces.

As for Bridgers, she is hip and well-liked by most of the office, despite the fact that she obviously does not care much for the gig. “Yeah, I’ll probably do this for a while,” the indie folk songwriter says. “But it’s kind of a bullshit job.”

Watch the episode below.

Oberst and the rest of Bright Eyes recently announced a reunion tour in anticipation of their comeback album that’s due out sometime this year. Bridgers is also gearing up to put out a new solo album, the follow-up to the excellent Stranger in the Alps. She’ll be out on the road all spring and you can grab concert tickets here. The two indie songwriters, as Better Oblivion Community Center, dropped their acclaimed self-titled debut just a little over a year ago.