The two were also joined by J Balvin and Bad Bunny 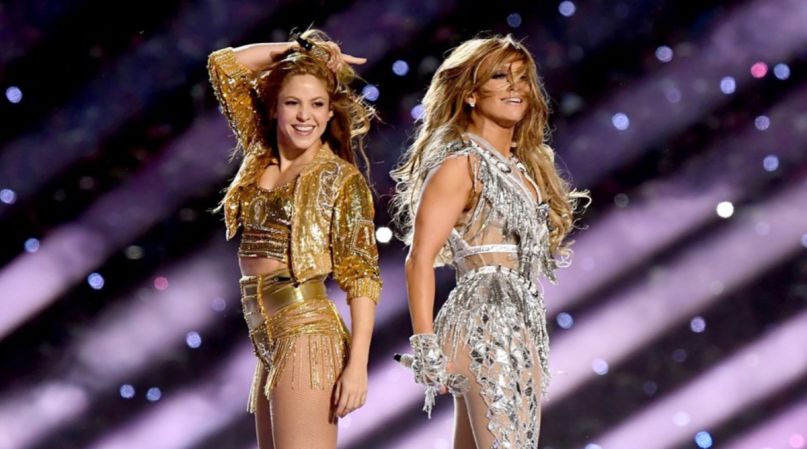 Shakira got the party started with a medley of her biggest singles, “She Wolf”, “Empire”, and “Whenever, Wherever”. Puerto Rican reggaeton artist Bad Bunny then joined Shakira for a collaborative rendition of “I Like It Like That” and “Chantaje”, before Shakira closed her portion of the set with “Hips Don’t Lie”.

Lopez followed with her own medley featuring “Jenny From the Block”, “Ain’t It Funny”, “Get Right”, “Waiting for Tonight”, and “On the Floor”. The Hustlers star also teamed with Colombian reggaeton star J Balvin to roll out “Mi Gente”, as well as her own 11-year-old daughter, Emme, for “Let’s Get Loud” (which featured an interpolation of Bruce Springsteen’s “Born in the USA”).

The 14-minute Halftime Show concluded with J. Lo and Shakira appearing onstage together for a thrilling team-up of “Waka Waka”.

Replay the full performance below.

This year’s Super Bowl Halftime Show marks the first time two female Latin artists have headlined. Before today, Gloria Estefan was the only Latina to take over the NFL halftime event — and that happened way back in 1992.

In a press conference in Miami earlier this week, J. Lo and Shakira talked about the significance of their Halftime performance. “Two Latinas doing this in this country at this time is just very empowering to us,” Lopez said, according to NBC News. Shakira added, “It’s very important for us to convey a message of unity and also to show what a relevant force the Latin community is in this country.”

“It’s also going to be a reminder of the heritage of this country,” Shakira commented, “which is one of diversity and that’s what we will be celebrating Sunday.” Shakira also has personal ties to Miami, a city with a massive Latino community, having lived there for many years before eventually moving to Barcelona.

Lopez will make an appearance at Oprah’s 2020 Vision event in Los Angeles later this month, and you can grab tickets here.