BTS Shake Their Cabooses in Grand Central Station Performing “On” for Fallon: Watch 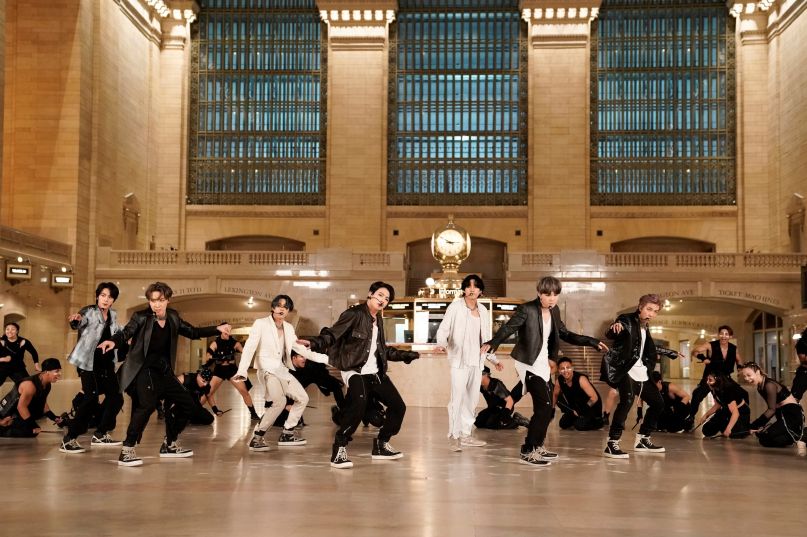 Grand Central Station in New York is among the prettiest train stations in the world, and on Monday night it hosted perhaps the most well-sculpted cabooses in its 100+ year history. As part of their appearance on The Tonight Show Starring Jimmy Fallon, the boys of BTS danced through the terminal with a wildly energetic performance of their new hit “ON”.

For the international superstars, it was the culmination of a full day of tourism. With Fallon leading the way, they took their first bites of pastrami at Katz’s Delicatessen, and even helped prep sandwiches and bus tables for the lunch rush. Afterwards they rode the subway for a goofy edition of Fallon’s Subway Olympics, and in-between, The Tonight Show aired Subway Stories from Fran Lebowitz and Lin Manuel-Miranda.

But the concert in Grand Central was always going to be the main event. BTS launched into the feverishly kinetic dance moves from their “ON” music video, twirling, leaping, popping and locking, in a performance that reminds us these men aren’t just world-class musicians, they are also professional athletes. “On” is a good show in the music video, but it’s even better in front of the high windows of the terminal, basking in the warm glow of the stone walls. It’s a great example of how architecture and performance can each enhance the other. Check out BTS’ “ON” below.

Last week, BTS released their highly-anticipated album Map of the Soul: 7.  They had previously promoted it by playing “Black Swan” on Corden. In April, BTS is launching a worldwide stadium tour with dates in South Korea, North America, the UK, and Europe. Tickets are available here.