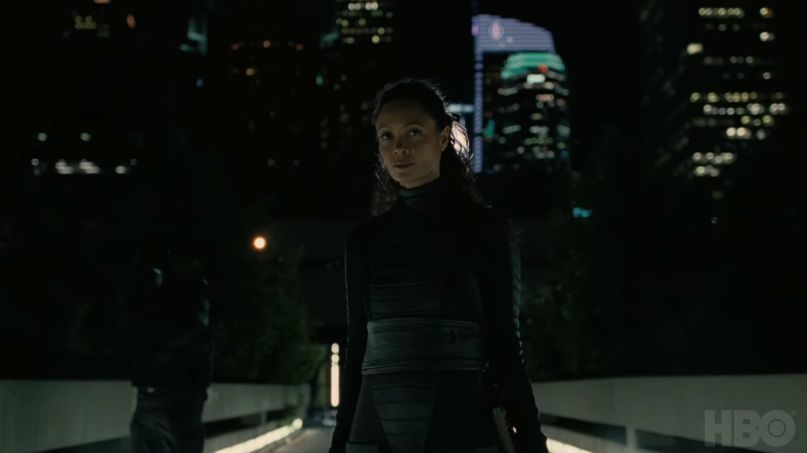 As the long-awaited premiere of Season 3 of Westworld nears, HBO has shared a new trailer to hold fans over.

In the official preview, we see Westworld at its most expanded and futuristic, filled with sci-fi high-rise skylines and Star Wars-esque hover crafts. The clip looks at new characters introduced in last July’s trailer, like Aaron Paul’s Caleb, a frustrated construction worker who appears to team up with Evan Rachel Wood’s Dolores, maybe reluctantly at first. “Have you been watching me?” he asks her while sitting at a diner. “Not me, but someone, something,” she responds.

In the midst of quick shots of the ongoing epic battle between hosts and the world, it also brings back a slew of familiar faces: Jeffrey Wright plugging away, Tessa Thompson standing before a new Transformers-style robot (with an air similar to Game of Thrones’ Daenerys with her dragons). Then there’s a few glimpses of Ed Harris, who at one point in a blood soaked shirt says “I finally understand my purpose, I’m gonna save the fuckin’ world.”

One of the biggest season plot reveals comes from Maive (Thandie Newton), who’s commanded by cast newbie Vincent Cassel to find and kill Dolores. Toward the end of the preview, we find the two women face-to-face, guns and knives in hand.

Watch the full Westworld trailer below. The new season premieres via HBO on March 15th at 9:00 p.m. local time. While you wait, go revisit Consequence of Sound’s breakdown of Season 2.