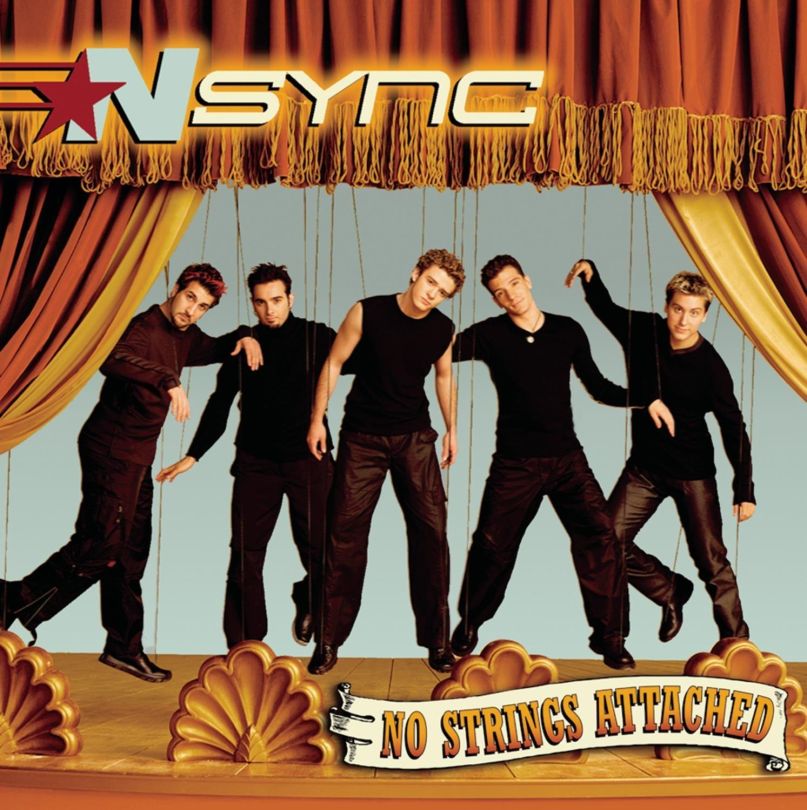 The Lowdown: Despite the public’s panic about the year 2000, the world, indeed, did not stop spinning back then. It did, however, morph in character — especially musically.

Insofar as it is possible to pinpoint a cultural shift to a specific moment in time, Y2K marks the switch to a new reality, one dictated by rapidly evolving technology. It’s the year that Big Brother premiered and jump-started a different chapter of television history, one that we’re still in today.


(Pick up a Copy of ‘N Sync’s No Strings Attached)

It’s also the year that Brad Pitt and Jennifer Aniston got married and, along with it, spurned a still-alive mass hysteria and obsession over celebrities’ personal lives (“celebs, they are just like us!” pronounced Us Weekly). Napster came to life in 2000 and revolutionized the music industry: folks could now potentially listen to music (albeit illegally, it turns out), without having to buy records. But, boy, were they still purchasing music at the time.

Now known as the unofficial year of pop, in 2000, Britney Spears climbed the charts to become, arguably, the biggest pop star in the world; Christina Aguilera won the Grammy for Best New Artist; Destiny’s Child debuted their first video with new band members and, generally speaking, boy bands galore enjoyed more than a modicum of success.

The Backstreet Boys — first with their 1996 eponymous album, then with 1999’s Millennium — sat at the top of the boy band totem pole at the start of the new decade … until ‘N Sync, another five-member boy band, released their second album, No Strings Attached. Until then, ‘N Sync was considered an afterthought to the more established Backstreet Boys, a group of five kids seeking to ride the wave of success first uncovered by another quintet.

Although the band’s first eponymous album sure did garner fans, No Strings Attached, which dropped on March 21, 2000, went on to sell over 2.4 million copies in its first week, becoming the first album in the history of music to sell over 2 million copies in seven days (a record that only Adele was able to surpass in 2015 upon the release of her third album, 25) and, eventually, earning the title of best-selling album of the year.

Millenium, by the Backstreet Boys, had sold a mere 1.1 million copies in its first week. ‘N Sync had officially surpassed their rival boy band and, in the process, proved the immense power of teenage fans.

The Good: No Strings Attached was the first album that the group released sans executive Lou Pearlman, by many dubbed a “boy band puppeteer,” following financial-related legal troubles (hence the record’s title). But what is it that made the 12-track compilation so great and sellable?

The album features some of the group’s biggest hits, including “It’s Gonna Be Me” and “Bye Bye Bye”, formulaic songs that follow the laws governing the pop world: catchy tunes, meaningless yet understandable lyrics (“I know that I can’t take no more, it ain’t no lie/ I want to see you out that door, baby bye bye bye”) and the right amount of Auto-Tune. Yet, there is something about the work as a whole that moves away from standard pop, leaning into, instead, a musical genre that had dominated the previous millennium: hip-hop.

The beatbox-like vocals of “It’s Gonna Be Me”, the percussion underlining “Bringin’ Da Noise”, and frontman Justin Timberlake’s semi-rapping in “Just Got Paid” are flavors borrowed from hip-hop. In a way, the band changed their ways, slightly loosening their grip on the popdom that initially landed them on the musical map and instead embracing something slightly different. By doing so, ‘N Sync was catapulted to new heights of fame.

Of course, certain tracks, including “This I Promise You” (lyrically speaking, likely the band’s best work), are pop-heavy ballads that appeal to a faithful audience. But it is the hip-hop infused songs that have largely stood the test of time, as proven by the collective joy felt in any karaoke bar around the world when would-be singers start belting out “Bye Bye Bye”.

The Bad: When venturing too far away from pop, like in the heavy-on-the-synthesizer “Bringin Da Noise” and the electronica-esque “I’ll Be Good for You”, No Strings Attached falls short (brownie points for trying, though, right?).

Although in ways ahead of its time in foreshadowing the importance of the virtual world when dating, “Digital Get Down” is the record’s biggest flop lyrically. Endless meaningless repetitions do little to elevate the track as a whole.

The Verdict: Twenty years removed from the success of No Strings Attached, one thing remains certain: crossing genres in music certainly warrants a wider audience. Take, for instance, our current era’s biggest boy band, BTS. If you recall, the South Korean septet started out as a hip-hop group, but they’ve since morphed into an all-encompassing, multi-genre phenomenon, with tracks treading the line between K-pop, EDM, R&B, and more.

Now, BTS resonates globally, drenching the musical industry outside of their country, even becoming the first Korean act to ever perform at the Grammys. Not to discredit the band’s own accomplishments, but much of that ethos can be traced back to No Strings Attached. By tearing a page out of ‘N Sync’s playbook, they’ve similarly been able to adapt to the time, all while maintaining originality. In that light, it’s easy to see the impact of N’Sync’s masterwork.

Essential Tracks: “Bye Bye Bye”, “It’s Gonna Be Me”, and “This I Promise You”