Coronavirus Self-Care: How to Quarantine with Movies and TV

From James Bond to Westworld, here's how to make the best of your living room

by Clint Worthington and Michael Roffman 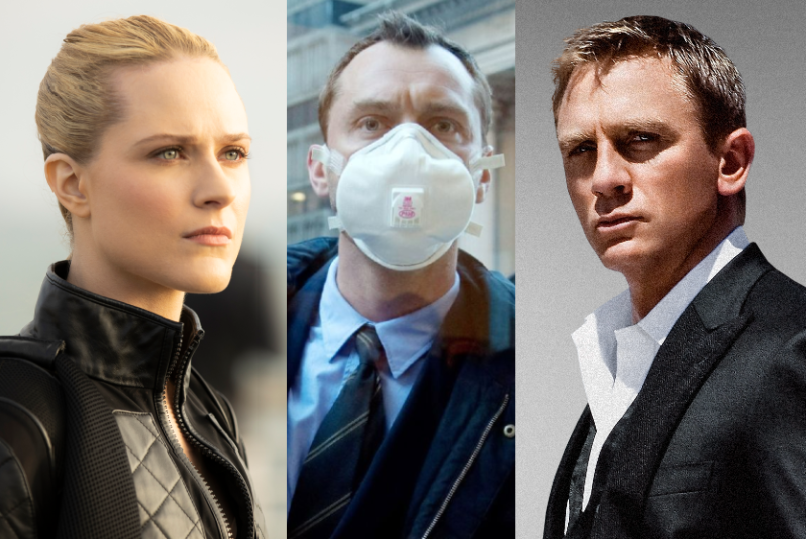 Right now, the world is in the midst of an outbreak of coronavirus (COVID-19). The virus was first found in China back in December, but has since found itself in countries across the world, including the United States. The World Health Organization has officially declared this a global pandemic, and officials are warning everyone to avoid public gatherings, wash your hands, and avoid contact with others if you can help it.

For a lot of us, symptomatic or no, that means holing up in our homes, working remotely (if you are afforded that option), and self-quarantining until it’s safe to come out again. Social distancing is the key to avoiding the virus — or, if you might have it, spreading it to others. This, of course, means many of us have a lot more time on our hands than we might normally. So what better time to work through our respective streaming queues?

As a public service, we here at Consequence of Sound have assembled a quick and dirty guide to the movies, TV shows, games, and videos we think will help you escape (or, in some cases, lean into) the chaos around us. So, wash your hands (20 seconds minimum!), grab your laptop, and read on.

Editor’s note: You can find a complete and updated list of the impacted cultural festivals, concerts and other cultural events here.

Daniel Craig as James Bond in No Time to Die

Were you shaken, maybe even stirred, to find out that the much-delayed No Time to Die was delayed yet again? Hold on to your martini because there’s plenty of 007 to go around until it finally, hopefully, maybe drops in November. While not all of his world-renown adventures are available for streaming, Amazon Prime, HBO Go, and Netflix have several titles to revisit from the comforts of your disease-free couch.

It can all be very confusing, so be sure to consult our franchise guide.

While news of Corona the beer’s demise at the hands of corona the virus are deeply exaggerated, Corona’s most loyal son, Dominic Toretto, is feeling the heat. Among the many recent cinematic casualties of the coronavirus pandemic is Fast 9, which has delayed release by an entire year amid concerns over the virus’ effects on global stability. Still, until such time as you can see Dom and his familia enact #JusticeforHan, there are nine other films (and an animated TV show!) to tide you over until the gang meets again.

It’ll take a bit of doing, though: The Fast and the Furious, 2 Fast 2 Furious, and Tokyo Drift are all available on USA’s streaming service (Hulu has an add-on); Fast Five (HBO), Fast & Furious 6 (FX), Furious 7 (FX); Fast & Furious Presents Hobbs & Shaw (HBO). Fast & Furious (confusingly, the fourth one) and The Fate of the Furious will all require rentals.

But, turn your eye to Netflix, and you’ll find the kid-geared CG animated series Fast & Furious: Spy Racers in which a government agency recruits a group of car-happy teens, led by Dom’s younger cousin *checks notes* Tony Toretto, to take down an evil car-based crime organization. If you really need your Fast fix until the ninth one comes out in 2021, that’s … an option?

Arguably the greatest hit to the entertainment industry has been the live scene. So many concerts and festivals have either been canceled or postponed over the past two weeks — and it’s truly a stroll through Bummerville. Eventually, we’re going to get that itch for live music again (if we haven’t already), which is why it’ll be nice to put on a rock ‘n’ roll movie every once and awhile. Sadly, a good number of the headliners — ahem, Almost Famous, Control, This Is Spinal Tap, The Commitments, and Popstar — will cost you a few bucks. However, there is a wide swath of music-fueled movies for your perusal; it just depends upon the depth of your roster of streaming networks.

Of course, if you’re in the mood for some non-fiction, you could tune into This Must Be the Gig or revisit the show’s sprawling back catalogue. Host Lior Phillips has spoken to over dozens upon dozens of your favorite acts about their first concerts, worst shows, and so much more. Below, you can hear Liam Gallagher wax nostalgic about his experiences in the live scene … and so much more.

We were so close to reuniting with the Abbots. Alas, we’ll have to wait until Paramount and John Krasinski decide when it’s safe to return to theaters again. Fortunately, that gives us plenty of time to revisit the 2018 original, and Hulu is currently streaming A Quiet Place. Seeing how the whole thing revolves around a family hunkering down amidst a time of chaos, the nature of the story is all too fitting for current times. Even better, you won’t have to worry about any crinkling, sniffing, or coughing while you watch. Below, you can extend the domestic nightmare with a great deep dive by The Horror Virgin. –Michael Roffman

Right about now, living in a galaxy far, far away might not seem like too hazardous a proposition. That said, Star Wars is currently in a really interesting place, even if The Rise of Skywalker wasn’t your cup of tea. We enjoyed it more than most, but if you’re looking to revisit Episode IX to see if it really was as good/bad as you thought, now’s as good a time as any as it drops digitally on Tuesday, March 17th.

But if you need some alternative Star Wars content in your life, the non-film legs of the franchise are stronger than ever. If you’re feeling some lo-fi space Western energy, spin through the eight chapters of The Mandalorian on Disney+ again while sipping some bone broth.

Or — if you’ve got a console — fire up Jedi Fallen Order (PC/Xbox/PS4) and take out your frustrations on many hordes of hapless stormtroopers with your handy-dandy lightsaber. Burning Man’s probably canceled too, so where else are you going to find a twink in a poncho twirling a glowstick?

What better time to indulge in the isolation and claustrophobia of The Overlook Hotel? Well, if you haven’t got around to either a.) seeing Mike Flanagan’s cruelly underrated Doctor Sleep or b.) its expansive three-and-a-half-hour director’s cut, then you might want to check into Amazon Prime. The epic sequel to Stanley Kubrick’s The Shining is available to rent and the Doctor is a perfect guest to join your self-quarantine.

Though, if you’re really thirsty for the Torrances, you could spend a whole day at the Overlook by also renting Kubrick’s 1980 masterpiece. Hell, go meta and make it a true-blue family occasion by grabbing the just-released Shining board game. Then, you can close out the night by hanging with The Losers’ Club, who recently covered Stephen King’s 2013 novel and Flanagan’s adaptation. Anything more … and we’re concerned.

After being canceled and stowed away, The Hunt is ironically one of the few new films hitting theaters right now. As we outlined in our mildly positive review, Blumhouse’s tongue-in-cheek romp is a grisly rollercoaster reimagining of “The Most Dangerous Game” and chock full of thrills. So, if you need to escape your house, you could always take a risk and join Betty Gilpin at the cineplex. Just bring your Purell. –Michael Roffman

For all you sadists out there, know that there are plenty of flicks with viral scares to keep you itching, squirming, and … smiling? Whatever floats your boat. Now, we’re confident there are other films we’re glossing over here — apologies if we’re not all racing to watch this stuff — but we’ve gathered a number of the biggies. From 28 Days Later to The Crazies, Outbreak to Quarantine, you’re in “good” company.

If you need a break from the screen, you could always actually read Stephen King’s The Stand. The similarities to now are a little jarring, but that’s all part of the fun, right? And because the idea of a book club is currently out of the question, feel free to join The Losers’ Club, who devoted not one, not two, but five episodes to the epic tome.