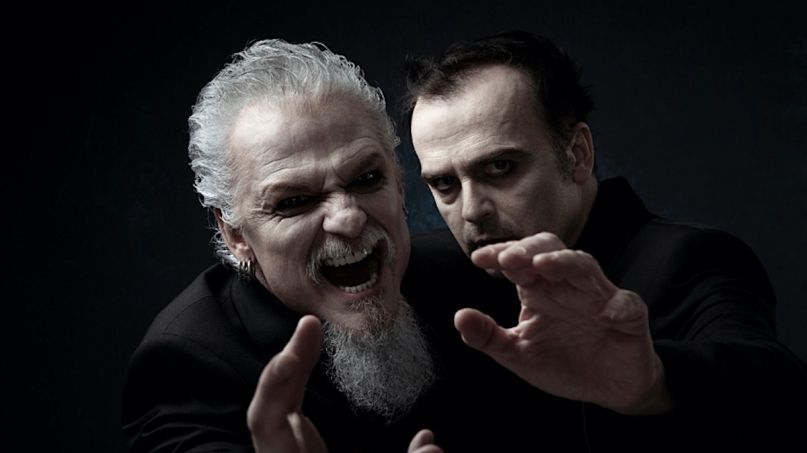 Longtime headbangers should be aware of the names Hansi Kürsch and Jon Schaffer — due to their work with Blind Guardian and Iced Earth, respectively. But the singer and guitarist have also been known to join forces (when their busy schedules permit) in Demons & Wizards.

After issuing a pair of albums in somewhat close succession – a self-titled debut in 2000 and Touched by the Crimson King in 2005 – further albums were nowhere to be found, leading fans to assume the band was kaput.


However, Demons & Wizards seemingly came out of nowhere in 2019 for live dates, before assembling their third studio offering. The appropriately-titled III was released on February 21st via Century Media Records, marking the outfit’s first new LP in 15 years.

Heavy Consequence caught up with Hansi Kürsch and Jon Schaffer to discuss the album, the long gap between releases, future plans, and more.

Read our interview with Demons & Wizards below, and pick up their new album, III, here.

On why there was such a long gap between albums

Hansi: It was an accident, to be honest. We were talking about this album in 2010, already, but we never had the chance to keep our whole focus on Demons & Wizards, since we have been working on Blind Guardian and Iced Earth. Therefore, there was no chance to match up our schedules – which brought us to the year 2018, before we really were able to join forces again. So, a little bit of a gap in our time schedules with regards to our main bands. And then there was a point that we decided it was the right time to do this album.

On how III compares to the band’s previous efforts

Jon: Musically, as humans, we grew a lot and learned a lot more about everything from life to production. So, that’s how it affected it. We set the goals early on to make this a very dynamic record and have a lot of different atmosphere, and to embrace the classic rock side that we love and that we delved into a little bit on the first two Demons & Wizards records.

But we went a little bit further on this one. There’s a lot of different environments on this album — you’ve got some progressive elements, some alternative elements, you’ve got classic rock, you’ve got straight-up headbanging metal, and some very dark, vicious stuff. I just think it’s a very colorful, dynamic record. For anybody that likes heavy music, there is something there for everyone.

Hansi: There is so much metal music being categorized nowadays. To define Demons & Wizards into one of these sections… I think it’s very complicated and does not pay tribute to what we are doing. We consider ourselves heavy metal. That is the main thing. We have some prog elements in there — no doubt about that. Depending on how you define power, yes, there is a lot of power. But we do not feel comfortable with that, because it is a genre has a lot of bands that we feel do a different kind of music than we do. And therefore, just call it “heavy metal” — we feel it is most suitable with that.

On the song “Diabolic” and its accompanying video

Jon: It didn’t feel like we had the proper opening for the album. So, I was feeling some pressure about that. And I grabbed my baritone guitar, I thought, “We have not had that element on a Demons & Wizards record.” The baritone has a heavier, darker, deeper sound. For those who don’t know — it’s somewhere between a guitar and bass. It’s got that ominous sort of feel to it. I started messing around with it and came up with that intro, and after that, it flowed really quickly in a very cool way.

So, I put together an arrangement and sent it to Hansi, and said, “I think this could be an opener for the album.” He felt that way too, and I think that was the last one we wrote together. It was killer. And the video was amazing to shoot. When we decided we were going to take it in a direction of Part II of “Heaven Denies” – which was the first song on the first album – and the idea that this song is a really strong statement for Demons & Wizards to make, after not having done anything in 15 years, that it will also be a good option to be our first single and video.

Because of the epic nature of the song, we wanted to make the video epic. We hired iCODE over in Belgrade, Serbia, who I have worked with for the Iced Earth “Black Flag” video, and Hansi has done videos with them for Blind Guardian stuff in the past. We know their quality and what they’re capable of, and we can make something really extraordinary that is affordable – compared to what we would get in the Western Europe and the United States. So, we scheduled that in between our festivals last summer, and we went over there, and filmed two videos. The second one is called “Wolves in Winter”.

On whether a fourth Demons & Wizards album is in the cards

Hansi: Yes, that is a very possible thing. We have not set up anything right now, but it is very likely, because what we are facing now is to balance our schedules for Iced Earth and Blind Guardian, which run along the same way for a while. And that gives us the opportunity hopefully to keep our minds together for a possible Demons & Wizards album. But nothing is set in stone — we have to go back to work with Iced Earth and Black Guardian. But working according with each other, I would imagine there will be a spot in the close future.

Jon: Because we spent over a year on this Demons and Wizard cycle, we sort of worked backwards from what our initial plan was – once the word got around that Hansi and I were going to do another record, then we got offered to headline Wacken. And then from there, a lot of other shows happened. But that created another set of challenges that we had to face and figure out how we were going to do this without interrupting a full two years in the work of Iced Earth and Blind Guardian – because we also have our commitments with our main bands.

So, it’s basically write and record the record and then tour around the other bands, or in this case, we tour and we focus on the record all in the same time frame. It’s bittersweet, because we’re very proud of this record, and the normal thing would be to take off and go do shows… but we do have to resume duties with our main bands. So, shows are likely going to have to be on hold for this Demons & Wizards period for a couple of years. That’s the reality of it.