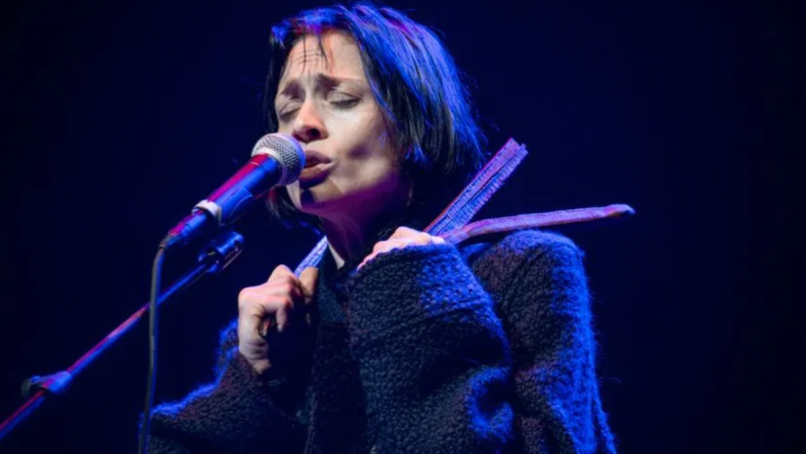 For months now, Fiona Apple has been telling fans that a new album is coming. She teased a 2020 release date last fall, said she’d be ready “in a few months” back in January, and finally announced she’d completed the LP earlier this month. Now, Apple has revealed more details about the follow-up to 2012’s The Idler Wheel…, including its title: Fetch the Bolt Cutters.

All the new particulars come from an expansive profile in The New Yorker. The Fetch the Bolt Cutters title originates from a line Gillian Anderson’s character uses in the British police procedural The Fall. The scene finds Anderson’s Detective Stella Gibson freeing a girl from a locked room in which she’d been tortured. That sort of abuse and how we get through it is a central theme to the record; in fact, Apple apparently considered putting a sketch of Harvey Weinstein using his walker on the album cover.

“Really, what it’s about is not being afraid to speak,” Apple said of the title.

As such, the album’s 13 tracks are “raw” and “percussion-heavy,” full of chanting and percussive instruments like wooden blocks and bells. Songs include “For Her”, written shortly after Brett Kavanaugh’s Supreme Court nomination hearings and featuring the line, “Good mornin’! Good mornin’!/ You raped me in the same bed your daughter was born in.” The title track makes a lyrical reference to Kate Bush as Apple sings, “I needed to run up that hill/ I will, I will, I will.” Cara Delevingne also contributes to “Fetch the Bolt Cutters”, singing harmonies and, apparently,  meowing.

Other track titles include “Newspaper”, “On I Go”, “The Drumset Is Gone”, “Rack of His”, “Kick Me Under the Table”, “Ladies”, “Shameka”, “Heavy Balloon”, and “I Want You to Love Me”. Lyrics from the songs are quoted throughout the New Yorker piece.

Apple recorded the LP at her home studio, where she also handled production duties herself. Joining her band for the sessions were drummer Amy Aileen Wood, bassist Sebastian Steinberg, and guitarist Davíd Garza.

Elsewhere in the interview, Apple made a number of frank admissions. She recalled getting sober, including quitting cocaine after “one excruciating night” at Quentin Tarantino’s house with Paul Thomas Anderson. “Every addict should just get locked in a private movie theatre with QT and PTA on coke,” she mused, “and they’ll never want to do it again.”

She also touched on her past relationship with Louis C.K., whom she was briefly involved with years ago. While she originally expected the disgraced comedian to take responsibility for his actions, she was disappointed in his response. Following a leak of C.K.’s first attempt at a comeback gig, Apple “sent him a warm note, urging him to dig deeper.”

Later, she befriended one of C.K.’s victims, Rebecca Corry, through her pit bull advocacy group, Stand Up for Pits. That friendship changed Apple’s view on the comedian’s work, as what she previously saw as “honesty” now looked “like a smoke screen.” She added via text that C.K. will be “useless” if he’s incapable of more meaningful introspection: “I SHAKE when I have to think and write about myself. It’s scary to go there but I go there. He is so WEAK.”

Apple also hit on things like her back catalog, calling When the Pawn… “just a great album” and pointing to “Please Please Please” off Extraordinary Machine as her “one weak song.” Read the entire profile over at The New Yorker as we await an official announcement on Fetch the Bolt Cutters.