Este Haim covers "I'm Not a Girl, Not Yet a Woman" inside a deli 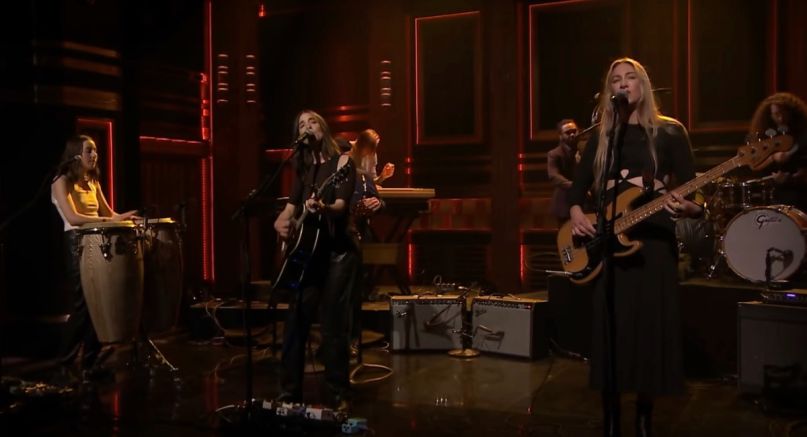 Just one day after HAIM played “The Steps” on Fallon, fans received a double video treat: a performance of “Summer Girl” from that same Tonight Show set, as well as a cover of Britney Spears done inside a delicatessen.

“Summer Girl” initially dropped as a bonus track for “The Steps” single. That version featured a crisp drum kit, so it was something of a surprise to see Alana Haim take the Tonight Show stage with a pair of conga drums. This gave “Summer Girl” a sly, coffeehouse vibe, enhanced by the standing bass and elevated with a piercing live sax. Check out the video below.

As for the Britney Spears cover, it took place as part of the band’s secret deli tour. This is to commemorate HAIM’s first live show at Canters Deli in LA, which the trio has also celebrated with the cover of their upcoming album Women in Music Pt. III.

The deli tour took the sisters to Sarge’s Delicatessen & Diner in NYC. Fan footage captured Este Haim setting down her bass guitar and announcing “I’m going to do my best Britney.” She pinched her voice and fluttered her hands through “I’m Not a Girl, Not Yet a Woman,” in a performance that drew whoops and cheers from the crowd. Click through the Instagram story to see clips.

The exact location of the next deli concert hasn’t been announced, but you can sign up for news and tickets here. Haim also have a few traditional tour dates on the horizon, including festival appearances at Roskilde in Denmark and Mad Cool in Spain. Tickets are available here.