Plus, watch the former One Direction member talk about his love of the Green Bay Packers 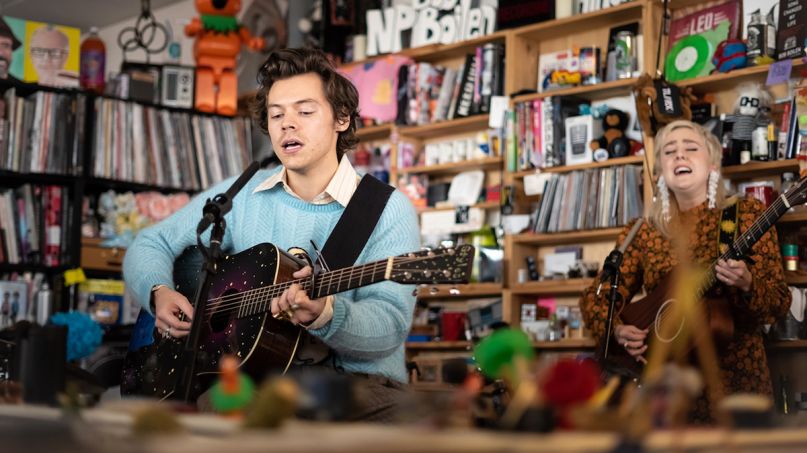 Only a few days into what’s essentially an unofficial lockdown, and plenty of us are already feeling cooped up. Leave it to NPR’s Tiny Desk Concert to remind us how much of a good time one can have in a confined space by debuting a new performance from Harry Styles.

The pop star brought four tracks off his sophomore solo album, Fine Line, to the beloved sessions series. Although it may have been tight, Styles still managed to cram a five-piece band behind the NPR desk. Even so, the stripped down arrangements highlighted the vast array of sounds layered into the arena pop of Fine Line: the country folk of “Cherry”, the ’70s rock lines on “Watermelon Sugar”, the island soul of “To Be So Lonely”, and the in escapable funk of “Adore You”. (The latter of those tracks, Styles revealed, really is about a fish.)

After performing behind the Tiny Desk, Styles donned an Aaron Rodgers jersey to discuss his Green Bay Packers fandom with NPR’s resident Cheddar Head, Stephen Thompson. Specifically, he talked about how a boy who grew up in Worcestershire, England came to bleed gold and green, and discussed how he ended up with that Packers tattoo on his left arm.

Watch video of both the performance and the brief interview below.

Styles has plans to support Fine Line on a massive world tour, currently scheduled to launch April 15th in the UK. Included on the docket is his two-night “Harryween Fancy Dress Party” at New York City’s Madison Square Garden, featuring support from Orville Peck and Madison Cunningham. While it’s likely some of the dates will shift in the coming days and weeks, tickets are available here.