Insane Clown Posse’s Shaggy Hospitalized, But He Swears It’s Not for Coronavirus

Unfortunately, the hospital did not have Faygo 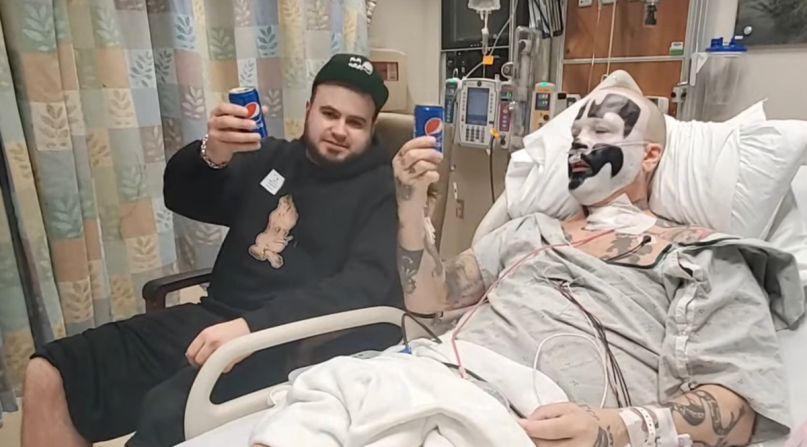 ICP's Shaggy in the hospital

Insane Clown Posse co-founder Shaggy is in the hospital, but fret not: he says he doesn’t have coronavirus.

The rapper undoubtely gave Juggalo Nation a scare on Friday after he was photographed in a hospital bed mere hours after advising fans that they could defeat COVID-19 by eating “dirt snow.” While “dirt snow” is about as effective at combating the virus as Faygo (it’s not at all), Shaggy’s consumption of it wasn’t the reason for his hospitalization. At least, so he says. Rather, the ICP member says he needed neck surgery.

Hilariously, following his surgery, Shaggy hosted a live webcast from his hospital bed, donning full face paint and all. Not hilariously, the hospital did not have Faygo, so Shaggy had to drink Pepsi.

Shaggy hopes to be back in action in time for ICP’s “The Wicked Clowns From Outer Space 2 Tour”, which is scheduled to kick off in April.

The fate of Shaggy depends on you tuning in tonight at 9:15. #ShaggyandTheCreep

Live from the hospital! Link in bio! Join the live chat! #ShaggyandTheCreep