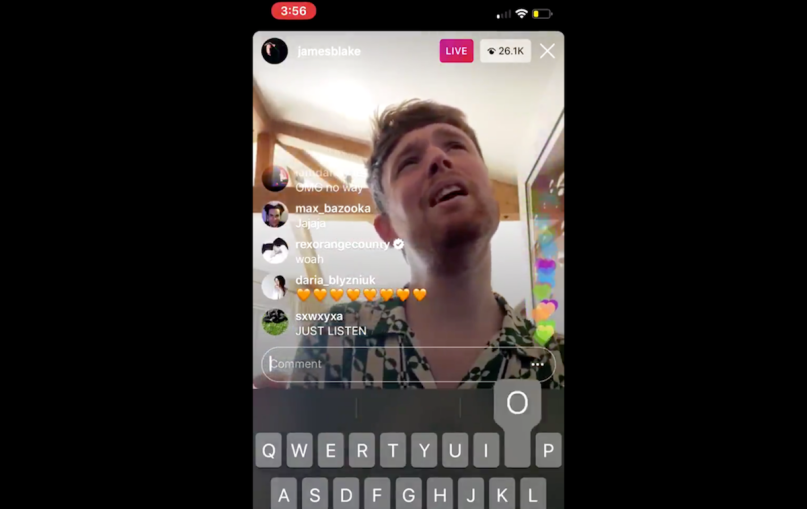 Livestreaming on Instagram is officially the place to be if you’re an artist cooped up indoors because of COVID-19. That’s where James Blake was Monday afternoon, and he certainly made it worthwhile for all his viewers.

“Ok looks like we’re in this for the long haul so I’m jumping in… gotta play for you guys somehow,” he wrote on Twitter prior to “taking the stage” on Instagram Live. The UK crooner’s set took place live from his and partner Jameela Jamil’s living room and boasted one gorgeous cover after another. Among them: Radiohead’s “No Surprises”, “Billie Eilish’s “when the party’s over”, and Frank Ocean’s “Godspeed”.

Additionally, Blake performed Joni Mitchell’s “A Case of You”, Bill Withers’ “Hope That She’ll Be Happier”, and two of his own originals, “Retrograde” and “Life Round Here”. His Instagram Live concert became so popular that at one point he had 26,000 (!) people tuned in.

Update: You can replay the full concert below.

Find clips from Blake’s livestream below.

JAMES BLAKE PLAYED LIFE ROUND HERE ON HIS INSTAGRAM LIVE TODAY AND I ASCENDED pic.twitter.com/nIbcpVaXSd