Jeff Tweedy and His Sons Play “Evergreen” in Their Bathroom for Kimmel: Watch 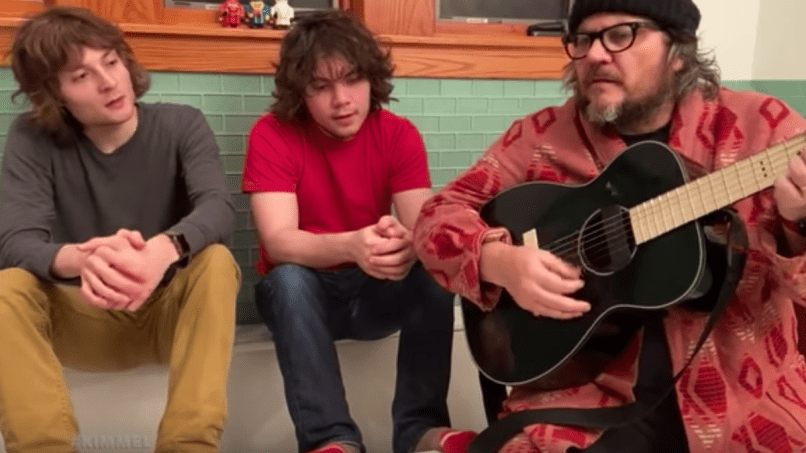 Late-night talk shows are figuring out how to continue entertaining folks in the age of self-isolation. Guests are Skyping in, hosts are broadcasting remotely, and musicians, apparently, are performing from their bathrooms. That’s what’s been going on over at Kimmel, where on Friday, The Killers sang “Caution” from their acoustically sound washroom. On Monday night, Jeff Tweedy and his sons, Spencer and Sammy, did the same, playing “Evergreen” Live in the Lavatory.

Of course, Jimmy Kimmel’s musical performances are usually the biggest in the late-night game, with his Live Concert Series sponsored by Mercedes-Benz and taking place on a stage above Hollywood Boulevard. Wilco were set to take that stage before all this coronavirus madness, so in their place the Tweedys delivered an at-home show just as they’ve been doing nightly on their stuffinourhouse Instagram account.

For Kimmel, the family trio sat around the bathtub and sang “Evergreen” off Daddy Tweedy’s latest solo album, WARMER. Spencer played drums on that LP and Sammy did the photography, but for their restroom rendition, the young Tweedys backed up their pops on vocals. Check out the performance below.

Wilco, meanwhile, scrapped a bunch of spring concerts, but are still currently planning on linking up with Sleater-Kinney for a co-headlining summer trek. Get tickets here.