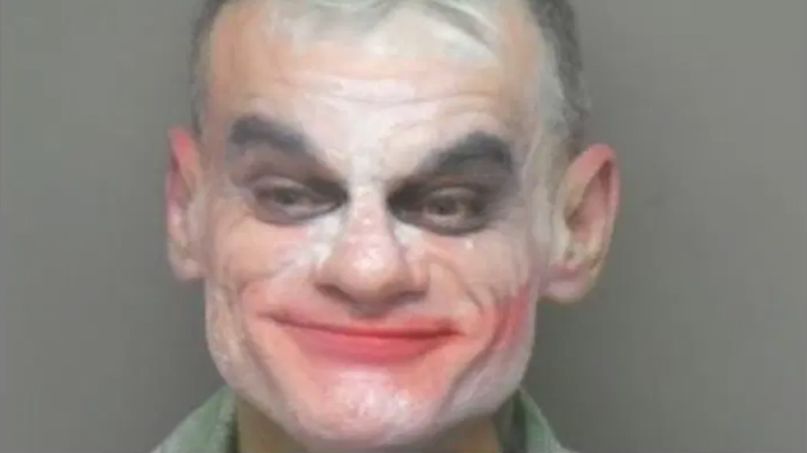 Maybe it’s time Joker fans consider being a little less serious. On Thursday, a Missouri man who dressed up as the Joker, face paint and all, was charged with felony first-degree terrorist threats.

The 51-year-old man, Jeremey Garnier, dressed up as the villain and live-streamed himself on Facebook this past Monday. During that video, he said he planned on killing random people for attention, notes The Hollywood Reporter. Garnier was later arrested and ordered to be held without bail after he was charged.

Garnier, a self-proclaimed performance artist, told police that he was trying to raise awareness about the country’s opioid crisis (natch). However, throughout the video, which you can see below, he repeatedly mentions wanting to kill people. “When you share this video, let them know that the Joker ain’t joking around when it comes to serious addiction. You need to leave that stuff alone and inspire the children not to do it. And … kill a few people while you’re at it.”

In the video, Garnier repeatedly mentions that he has bombs in his vehicle, which he intends to use if confronted by police. He enters a mall and interacts with random shoppers before being confronted by police, who tell him he can’t have his face covered inside the mall. Later, while at a local St. Louis restaurant, Garnier orders a Sprite, saying, “I can’t be inebriated when I’m planning on killing a bunch of people.” He is seen being arrested a short time later.

Nearly every modern film in the Joker franchise has been linked to death in some way. In 2008, following his portrayal of Joker in The Dark Knight, Heath Ledger died from an accidental overdose. In 2012, during a midnight screening of The Dark Knight Rises in Aurora, Colorado, a gunman killed 12 people in the audience and injured 70 others. So once the 2019 film Joker was set to hit theaters, people urged the producers to be wary of inciting violence.