Paul Stanley wore Bryant's No. 24 Lakers jersey during the show 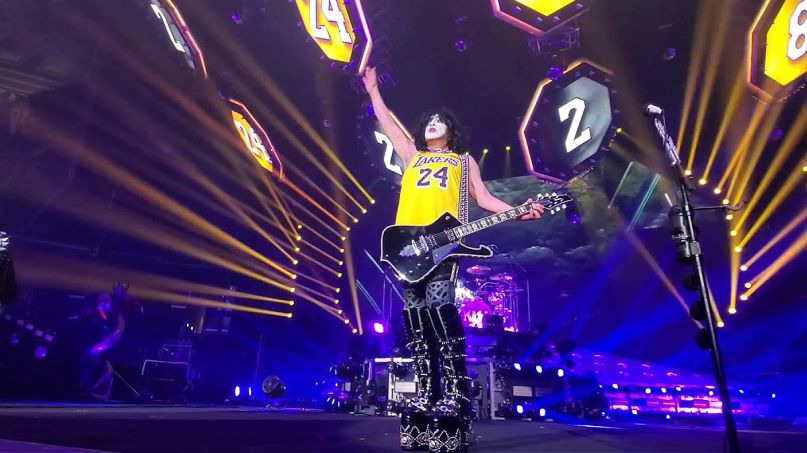 KISS paid tribute to late NBA legend Kobe Bryant during their show at Staples Center in Los Angeles on Wednesday night. Bryant, 41, and his 13-year-old daughter, Gianna, died in a tragic helicopter crash along with seven others in late January, and KISS’ Paul Stanley took a moment to show his respect.

Donning Bryant’s No. 24 Lakers jersey, Stanley gave a brief monologue during the band’s set before playing Destroyer track “Do You Love Me”.

“We’re in the house that Kobe built,” Stanley said of the Lakers’ home arena. “None of us would be here if this place wasn’t really like a memorial to somebody who was so much more than a basketball player, somebody who’s been a role model. And tonight, I think we dedicate this show not only to Kobe and his daughter Gigi, but to all the people who perished on that helicopter.”

Bryant’s retired numbers — No. 8 and 24 — were displayed on the band’s stage screens as they performed “Do You Love Me”. As the song concluded, Lakers-colored purple and gold balloons flooded the stage and Stanley dribbled them like basketballs.

Stanley previously expressed his sadness after Bryant’s death on Twitter. Posted with a picture of Bryant and himself shaking hands courtside, Stanley wrote: “WOW! Kobe. Such A Shock. My Condolences To His Wife And Children. Very, very sad. #KobeBryant”.

KISS will continue the U.S. leg of their “End of the Road Tour” with Van Halen’s David Lee Roth through mid-March before heading across Europe this summer. After that, they’ll return to the States for another leg in the fall. Get tickets to KISS’ upcoming shows here.

WOW! Kobe. Such A Shock. My Condolences To His Wife And Children. Very, very sad. #KobeBryant pic.twitter.com/4UM6Vap8Dc