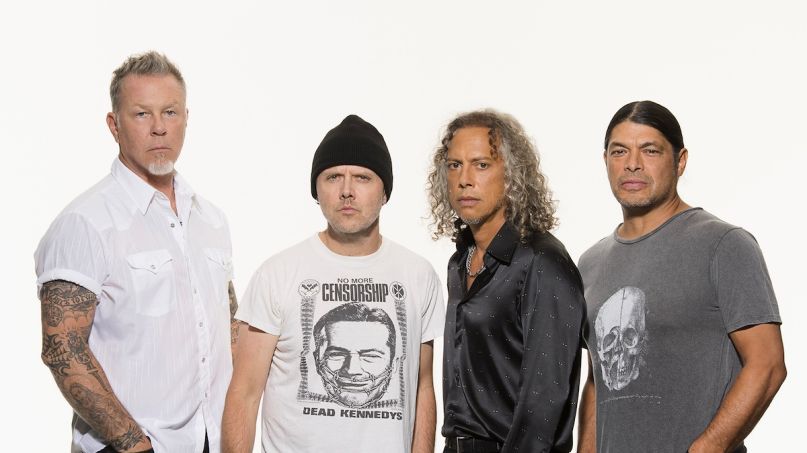 Metallica were set to hit the road again following James Hetfield’s rehab stint last fall, but now the breaks have been put on all touring for the first half of the year. As a result of the coronavirus epidemic, the metal legends are postponing their spring tour with Greta Van Fleet, and will no longer be headlining a couple of major U.S. rock festivals.

The iconic metal act was supposed to headline a South American tour with support from Greta Van Fleet in April, but announced on Monday that the trek will likely be postponed until December. The metal veterans still plan to take Greta Van Fleet out with them, but some of the venues may change from the spring itinerary.

Update – March 25th: Metallica have now revealed the new dates for their South American tour with Greta Van Fleet. The brief jaunt kicks off December 4th in Buenos Aires, Argentina, and runs through a December 20th show in Belo Horizonte, Brazil. See the full itinerary below, and get tickets here.

What’s more, as reported earlier today, promoter Danny Wimmer Presents has canceled its trio of spring festivals: Epicenter, Welcome to Rockville, and Sonic Temple. Metallica were originally slated to headline all three of those festivals, but had recently dropped off Sonic Temple because it conflicted with Hetfield’s recovery program. Now, none of those festivals will take place this year.

One piece of good news is that Metallica has re-joined Louisville’s Louder Than Life lineup in September after previously dropping off that festival to allow Hetfield to stick to his recovery schedule. The band will now headline the newly added Thursday (September 17th) bill. Update, April 24th: Louder Than Life has been canceled, too.

As of now, Metallica are only scheduled to play the Aftershock festival in Sacramento, California, in October.

Additionally, Metallica promise to make up the Australian and New Zealand dates they had to cancel in the fall when Hetfield first started his rehab program.

Metallica offered a lengthy update on their website, stating in part:

“Greetings… not from our usual HQ haunts, but this time from our living rooms, bedrooms, and basements. As many of you know, in our nearly forty years of touring, we’ve had a few mishaps along the way: broken bones, trashed appendixes, a pyro mishap, backs thrown out, crazy weather, food poisoning (beware of the oysters!), and even one way next-level anxiety attack! None of it has ever stopped us, but this is obviously a very different time, and leaving the house now literally means taking your life in your hands. Unfortunately, in these surreal times, that means we have to stay away from each other for the foreseeable future before we can start thinking about ‘Tallica Family reunions around the world.”

Outside of the band’s website update, Kirk Hammett reported via Instagram that he’s working on new riffs during his downtime. “Things are most definitely not business-as-usual, but I’m good, staying safe, working on riffs … hope you are all okay out there as well,” he wrote alongside a GIF of himself playing guitar. This fall will mark four years since Metallica released their latest album, Hardwired … To Self-Destruct.

Metallica are also offering up a nice treat to keep fans entertained at home, launching a #MetallicaMondays concert series, beginning tonight (March 23rd) with their 2019 Slane Castle show via their YouTube and Facebook channels. Update – March 25th: You can now watch the full Slane Castle show below.

Need to take a break from Netflix before you binge-watch the entire library? Introducing our brand new concert series: #MetallicaMondays, debuting tonight on our YouTube channel and on Facebook!

Things are most definitely not business-as-usual, but I’m good, staying safe, working on riffs … hope you are all okay out there as well 🖤🖤🖤