Mr. Bungle Are Re-Recording Their 1986 Demo Tape with Dave Lombardo and Scott Ian 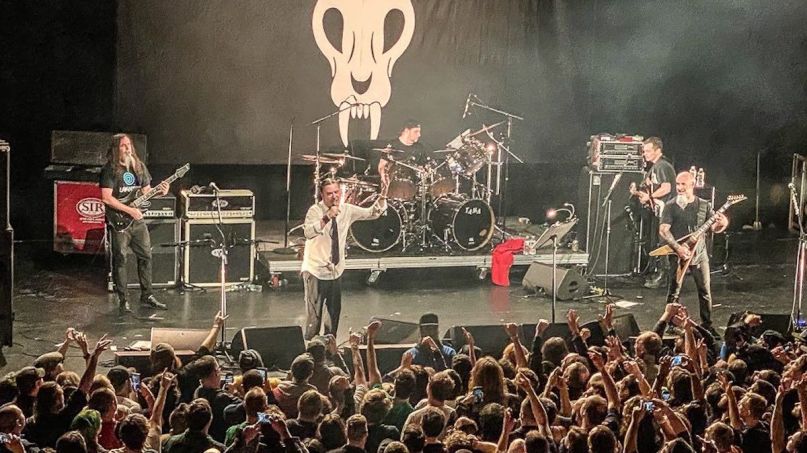 After teasing that they were in the studio, Mr. Bungle have officially announced they are re-recording their 1986 demo, The Raging Wrath of the Easter Bunny. The new version is due out this fall.

“You knew all along, goddammit,” the band conceded on Twitter.

The sessions feature recent touring lineup of original members Mike Patton, Trey Spruance, and Trevor Dunn, with Anthrax guitarist Scott Ian and former Slayer drummer Dave Lombardo. This comes as much to delight to those who caught Mr. Bungle on their reunion tour — where they performed the demo in its entirety along with covers of thrash and hardcore classics.

“The music from The Raging Wrath, which we wrote when we were 15 and 17 years old, continued to be relevant to us,” guitarist Trey Spruance told Revolver. “But the original demo was never fully realized. It was a DIY four-track tape recording fully self-produced by our naive and wandering minds whilst still learning how to play our instruments and understand songwriting at its most basic level. Not to mention I’m pretty sure we were all virgins at the time — high-strung, bored teenagers with only a limited number of options [for] where to direct our energy in an impoverished, isolated town.”

The original Easter Bunny demo is the kind of charming lo-fi concoction as can only be made by miscreant teenage musicians. Dunn calls the quality of the recordings “so bad you can’t hear anything at all” — only partially true.

Lo-fi sound aside, the songs are hardcore and thrash of the classic strand, which was enough for Dunn, Patton, and Spruance to revisit the project’s origins. In fact, Lombardo actually laid down some new demos before the reunion tour even took place.

“I made a whole bunch of new demos of the old demos with drum templates,” Spruance explained. “I mapped them to the originals so it feels the same tempo-wise and just put ‘What would Lombardo do?’ drum parts on it. So Lombardo listened to it and then he made his own demo of that. Then Patton and Trevor got wind of it, and everyone was super psyched. But I think Mike didn’t want to be the one pushing for it, so I really have to give credit to Lombardo for being like, ‘Let’s do this.'”

Then Ian joined, turning the reunion lineup into a full-blown supergroup and adding even more thrash-metal experience to the band’s sonic repertoire.

“Holy crap — the songs sound so great!” Ian said of the new recordings. “Every day at the studio is like Christmas morning for me — each song we finish another present. I don’t know if I’m more excited about this record as a fan of Mr. Bungle or as a member of Mr. Bungle. Either way, I can’t wait for the world to hear it.”

The album is due out this fall on Ipecac Recordings.

You knew all along, goddamnit. https://t.co/upYrC9s7r0

Previous Story
The Weeknd Gets His Head Chopped Off in New “In Your Eyes” Video: Watch
Next Story
Music Streaming and Album Sales Are Down During Coronavirus Pandemic
Popular
More Stories
[fu-upload-form form_layout="media" title="Submit Your Photo"][input type="hidden" name="ugc" value="1"][/fu-upload-form]