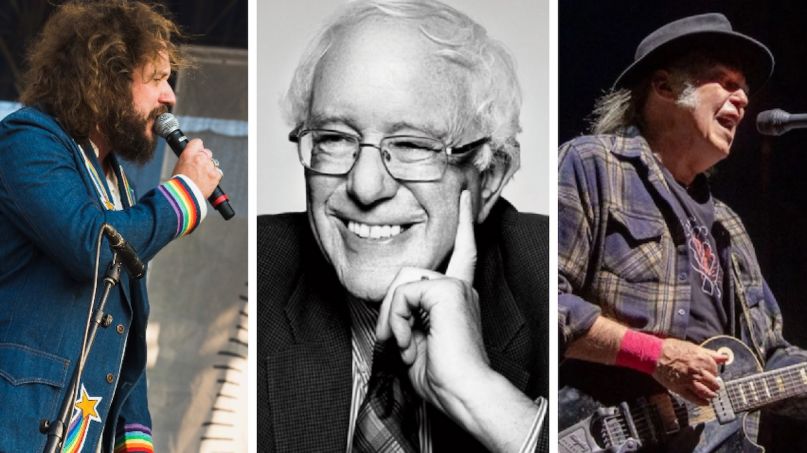 Bernie Sanders will livestream a digital rally this Monday, and he’s tapped Neil Young and My Morning Jacket’s frontman Jim James to appear at the event. This news comes just one week after Young published a passionate letter endorsing Sanders.

Sanders’ digital rally will occur on the eve of the next presidential primary to help get the vote out. Neil Young and his wife Daryl Hannah will make guest appearances, while Jim James and The Free Nationals will perform live. The event will not be open to the public, so as to prevent the spread of coronavirus, and instead can be viewed online from the safety and comfort of your home. You can watch it all go down when the event kicks off online at 7:00 p.m. ET on Sanders’ website. It’ll also be streaming below.

“There are so many of us that just want to find common ground with all living beings so that we can move forward together as a world to live in peace, good health, and equality,” James said in a statement. “Bernie speaks and lives the truth and has worked his entire life fighting for truth and justice — bringing people together for the common good — and that is why I believe he can help unite us now.”

Of course, it shouldn’t come as a surprise that Young and James want to see Sanders become the next President. Young is an outspoken environmental activist who openly despises Donald Trump, and he recently became an American citizen — though the application process was momentarily delayed due to his use of weed — just to help vote him out of office. As for James, he just wrote a whole album examining nature and humanity, and he wants to elect a presidential candidate that will fight for our planet.

Young and James are in good company when it comes to supporting Sanders in his run to become the Democratic presidential nominee. Dozens of other musicians have backed the Vermont senator, including Ariana Grande, Jack White, The Strokes, Cardi B, Vampire Weekend, Bon Iver, Public Enemy, Portugal. The Man, and Jeff Mangum of Neutral Milk Hotel.