A deep look at the tireless frontman's solo albums, supergroups, and collaborative efforts 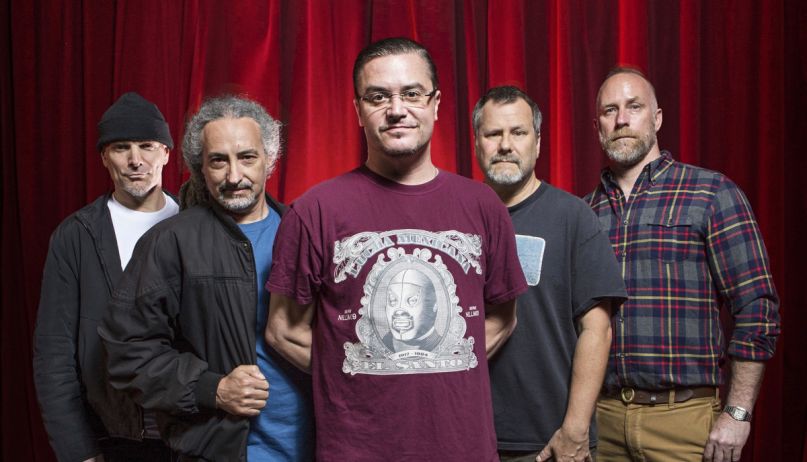 Outside the Spotlight takes a look at what famous musicians work on while outside the bright lights of their most famous gigs. Check out StubHub for all your Faith No More ticket needs.

Few artists embody the term “Renaissance man” like Mike Patton does. The iconoclastic frontman rocketed to fame as the mouthpiece for alt-metal titans Faith No More, who enlisted him to sing on their 1989 album, The Real Thing. That record peaked at No. 11 on the Billboard 200 and earned a platinum certification off the strength of its Top 10 lead single, “Epic”. Patton then got to flex his bizarro songwriting chops on FNM’s 1992 follow-up, Angel Dust, a decidedly not commercial smorgasbord of orchestral soundscapes, funk breakdowns, death metal growls, and spoken-word performances that nevertheless reached No. 10 on the Billboard 200 and sold several million copies worldwide.

Following these back-to-back smashes, Faith No More experienced a critical and commercial decline with 1995’s King for a Day… Fool for a Lifetime and 1997’s Album of the Year, before disbanding in 1998. Bassist Billy Gould broke the news in a statement via fax and email, saying: “the split will now enable each member to pursue his individual project(s) unhindered.” The band reunited in 2009 for the “Second Coming Tour” and has remained sporadically active since then, releasing the critically acclaimed Sol Invictus in 2015 and gearing up for a massive co-headlining tour with Korn this summer, marking their first shows in four years.

In between his Faith No More engagements, Patton has taken Gould’s note about “individual projects” to heart. He’s remained almost frighteningly prolific through myriad side projects, super groups, and solo endeavors, many of which he’s released on his own label, Ipecac Recordings. These ventures have established Patton as a champion of underground music, while he periodically returns to Faith No More to get his fill of performing before huge crowds — one of the best examples in modern music of having your cake and eating it, too.

Born and raised in Eureka, California, Patton had already been active in the NorCal music scene for several years by the time he met Faith No More. The singer formed the avant-metal collective Mr. Bungle in 1985 while all the members were still in high school. Although they originated as a death metal band, Mr. Bungle later incorporated elements of ska, funk, disco, and jazz into their sound, establishing Patton’s career-long penchant for genre agnosticism.

Patton first met Faith No More when they played Eureka in 1986 and gave them a copy of Mr. Bungle’s first demo, The Raging Wrath of the Easter Bunny. The following year, he caught them in San Francisco and gifted them a copy of Bungle’s second demo, Bowel of Chiley. Impressed by the singer’s versatility, Faith No More invited Patton to join the band in 1988, taking the place of frontman Chuck Mosley.

The singer continued to moonlight in Mr. Bungle after joining Faith No More, and in 1990, the band signed to Warner Bros. Records. If there were any concerns whether Faith No More had sanded off Patton’s roughest edges, Mr. Bungle’s 1991 eponymous debut instantly obliterated them. The album contains the breakneck stylistic shifts for which the group had become known, ping-ponging between free jazz, atonal metal, and carnivalesque funk — sometimes within the intro of the same song. Mr. Bungle continued to release music in tandem with Faith No More, ratcheting up the weirdness with 1995’s Disco Volante and 1999’s California; the triptych remains some of the most baffling music ever to be released on a major label.

If the music on Mr. Bungle’s debut is eclectic and often abrasive, it’s made slightly more palatable thanks to ace production from composer and multi-instrumentalist John Zorn. Patton released two solo albums on Zorn’s Tzadik Records during his first tenure in Faith No More, both of which tested the limits of blind fan loyalty and remain some of the enigmatic singer’s most challenging works. The first, 1996’s Adult Themes for Voice, is a harsh noise album comprising solely vocal sounds that Patton recorded on a TASCAM four-track Portastudio in various hotel rooms while touring with Faith No More. Its successor, 1997’s Pranzo Oltranzista, is an avant-garde jazz album based off Filippo Tommaso Marinetti’s “Futurist Cookbook”, in which every track is loosely connected by culinary themes. In describing these albums, the futility of music criticism and the limitations of written language reveal themselves. If you consider yourself in the 99th percentile of Patton diehards, you can find both full albums on YouTube and hear for yourself what they’re all about. Otherwise, neither is available on Spotify, and you don’t stand to gain much by seeking them out.

Following these caustic solo albums, Patton’s work at the turn of the century seemed tame by comparison. In 1998, he recruited ex-Slayer drummer Dave Lombardo, Melvins singer/guitarist Buzz Osborne, and Mr. Bungle bassist Trevor Dunn for the alt-metal group Fantômas, named after the fictional supervillain from 20th-century French crime novels and films. The group’s 1999 eponymous debut is quintessential Patton: a collection of 30 spasmodic, avant-garde grindcore songs (titled “Page 1” through “Page 30”) featuring blood-curdling, gibberish screams; sludgy, down-tuned riffing; and Lombardo’s signature double-bass explosions. Patton released Fantômas on Ipecac Recordings, which he also founded in 1999. The group have since released three more albums: 2001’s The Director’s Cut, a collection of reinterpreted horror and thriller theme songs; 2004’s Delìrivm Còrdia, which consists of one 74-minute song that weaves a tale of surgery without anesthesia; and 2005’s Suspended Animation, another 30-song concept album dedicated to little-known international holidays throughout the month of April.

If Lovage’s music was optimized for knocking boots, then Patton’s collaboration with New Jersey mathcore group Dillinger Escape Plan was made for throwing elbows and spin-kicks in the mosh pit. After ousting Dimitri Minakakis following the release of their 1999 debut album, Calculating Infinity, DEP enlisted Patton for 2002’s Irony Is a Dead Scene, a blistering four-song EP that features both artists at the peak of their powers. Patton’s high-pitched shrieks and guttural roars complement the band’s dizzying rhythms and angular riffs, while his taunting, sing-song, clean vocals inject a healthy dose of melody into the songs, an avenue DEP would further explore on future albums like Miss Machine and Ire Works.

As he contributed to his myriad super groups and collaborative projects, Patton was quietly plotting his boldest stylistic departure yet: a “pop” album. In 2000, he began working on a new record under the moniker Peeping Tom, trading song files in the mail with the likes of Norah Jones, Kool Keith, and Massive Attack. The long-gestating Peeping Tom finally came out via Ipecac in 2006, featuring co-writes from Dan the Automator and production assists from underground DJ Odd Nosdam. With its sunny falsetto vocals, plucky acoustic guitars, hypnotic hip-hop beats, and classic rock samples, Peeping Tom made it instantly clear that Patton’s vision of “pop” music was just as off-the-wall as his previous genre excursions. Still, it marked his most accessible work since Faith No More released its swan song, Album of the Year, nearly a decade prior.

The following year, Tomahawk released their third album, Anonymous, an enthralling collection of songs inspired by traditional Native American compositions that Denison researched. It would be their last album for six years, as Patton would soon embark on his largest-scale expedition of the decade. In late 2008, murmurs of an Album of the Year-era FNM reunion — including Patton, Gould, drummer Mike Bordin, keyboardist Roddy Bottom, and guitarist Jon Hudson — began to circulate. The band members initially dismissed the rumors, but they couldn’t front for long: In February 2009, they confirmed the reunion rumors, and in June, they embarked on the “Second Coming Tour”, trekking across Europe, South America, Mexico, New Zealand, and Australia through March of the following year.

Faith No More broke from the road just long enough for Patton to release Mondo Cane, a collection of Italian pop covers from the 1950s and ‘60s featuring a 40-member orchestra and 15-piece backing band. The band continued to play one-off dates over the next two years, stoking speculation of new music, but in 2012, they went on hiatus again, as Patton resumed touring with Tomahawk in support of their 2013 album, Oddfellows. That same year, Gould promised that FNM would return, but only when all members were willing and able to commit to the band.

Fans didn’t have to wait long. On July 4, 2014, Faith No More returned to the stage in support of Black Sabbath at London’s Hyde Park, debuting the new songs “Motherfucker” and “Superhero”. The band commenced work on a new studio album shortly thereafter, and on May 19, 2015, they released Sol Invictus, their first album in 18 years. Anchored by the aforementioned singles, Sol Invictus marked a splendid return to form, highlighting Faith No More’s caustic wit and anti-commercial tendencies (“Motherfucker”), anthemic rockers (“Superhero”, “Separation Anxiety”), and slow-burning, progressive epics to rival their most ambitious ‘90s work (“Matador”). Sol Invictus debuted at No. 15 on the Billboard 200 and earned widespread critical praise while its accompanying tour was rapturously received. With Sol Invictus, one of rock’s most enigmatic bands had launched one of the most successful comebacks of 2015.

And then, just as suddenly as they returned, Faith No More disappeared again. The band wrapped its tour at the end of 2015 and reunited with Mosley for two shows in 2016 to commemorate the reissue of its debut album, We Care a Lot. (Mosley died in 2017 from “addiction-related reasons.”) Since then, Faith No More have remained dormant, but their workaholic frontman certainly hasn’t. In 2017, Patton scored the soundtrack to Netflix’s adaptation of Stephen King’s 1922 and released the eponymous debut album of his new hardcore punk super group Dead Cross, featuring Lombardo, Retox guitarist Michael Crain, and the Locust guitarist Justin Pearson. Dead Cross contained some of Patton’s most incendiary work since Irony Is a Dead Scene, combining the customary weirdness of Fantômas with the breakneck thrash assault of Slayer.

As it stands, 2020 is shaping up to be Patton’s busiest year yet. He recently completed a brief run of reunion shows with Mr. Bungle, featuring a lineup that included Anthrax’s Scott Ian and former Slayer drummer Dave Lombardo. And now the band is in the studio recording their first new music in more than 20 years. Patton is also recording new albums with Dead Cross and Tomahawk and will release a new LP from yet another one of his bands, tētēma, in April.

This is not even a remotely comprehensive guide to Patton’s work outside Faith No More; that could fill an encyclopedia. Still, many listeners know him primarily as the voice behind hits like “Epic” and “Midlife Crisis” and they’re eager to catch FNM on the road this summer for their first proper tour in five years. In a way, the lineup reflects Faith No More’s 30-year reign and influence: Nu-metal stalwarts Korn have cited the band as an influence, while the inclusion of post-metal newcomers and Ipecac signees Spotlights proves that Patton still has his finger on the pulse of heavy music. The multi-hyphenate singer has built an illustrious career out of an unwavering dedication to pursuing his every musical instinct — and in a few months, Patton’s vision will be on display before the massive audiences he deserves.

Check out StubHub for all your Faith No More ticket needs.