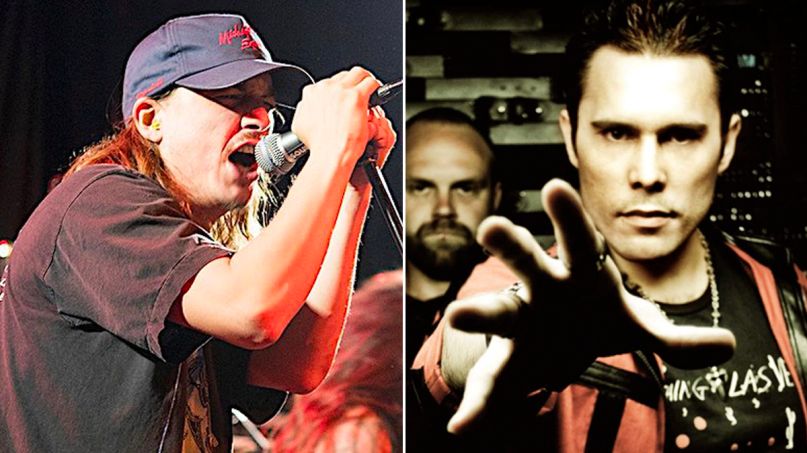 Marginal nu-metal band Trapt have become the punching bag of the heavy metal community after frontman Chris Taylor Brown went on a racist three-day Twitter rant. What started as a defense of President Trump’s response to the COVID-19 pandemic devolved into a hate-filled ego trip. Texan thrashers Power Trip are among those who took offense, challenging Trapt to see who can draw more concert-goers to an upcoming show.

Power Trip frontman Riley Gale tweeted, “i bet my band out draws yours in your own home town @TRAPTOFFICIAL want to put it to the test? two shows, different venues, same night. loser donates their entire guarantee to a charity of the winners choosing. @powertriptx is the band. step up or be labeled COWARDS.”

Once again proving their ignorance, Trapt replied, “You don’t sell tickets to anything….”

“sounds like you’re scared to play the game,” Gale fired back. “is this where i drop the sell out figures from our headlining tours, or our high presale numbers from everywhere else? how about hometown? don’t even get me started on walk up numbers. you’ve already lost, but pick your poison, nerd.”

The back and forth continued in this fashion, with Brown resorting to cheap disses about Spotify play counts and irrelevant name-calling (“you are a Bernie bitch”). In the end, Gale further exposed Trapt as the “fake it til you make it” hacks that they continuously prove themselves to be. He even posted a Twitter audit, which stated that over half of Trapt’s 20,000-plus Twitter followers are bots.

Eventually, Trapt began ignoring Gale’s posts, making it seem unlikely the band will meet Power Trip’s concert challenge. Although Gale admitted to instigating the beef, he only called out Trapt after he saw them “bullying people online for shit like being poor.”

In the end, Gale signed off victrious: “the best part about today was this was all just quarantine inflicted boredom that took no effort. it’s nice to see such a positive reaction at shutting down such a hateful band. makes me wonder what i could do if i really tried. if y’all need me to call anybody else out holler.”

Power Trip are currently in the studio recording the highly anticipated follow-up to 2017’s Nightmare Logic. In case they do end up challenging Trapt to a concert-off, you can get tickets to Power Trip’s upcoming shows here.

You don’t sell tickets to anything….

sounds like you’re scared to play the game. is this where i drop the sell out figures from our headlining tours, or our high presale numbers from everywhere else? how about hometown? don’t even get me started on walk up numbers. you’ve already lost, but pick your poison, nerd. https://t.co/5r02PyhywJ

We played an acoustic show just myself and my guitar player on Cajon and did 300 people sold out in Los Gatos. That was basically the last Bay Area show. We’ll be coming this year and we will probably draw 500-600 people in the South Bay. Come on out!

nice! our last 3 bay area shows were all over 1000 people. keep grinding guys, you’ll get there!

Next Bay Area show we do, we will do better numbers than your shitty metal band…. Til then. Oh and 30 dollar tickets. Your fans have no money. Your spotify and Pandora numbers are absolutely horrible.

Buddy your band is never going to do anything ever. You will forever be scraping by. This is why you are a Bernie bitch

that’s weird, i’d call countless US headliners and european tours and getting flown to indonesia for the 1st time last year just to headline a festival of 8k+ people is more than “anything”. but keep avoiding the challenge, pal. cuz ya know you’ve already lost. https://t.co/fILw7JNb91

i’d be willing to bet my band would outdraw yours with only 24 hours notice to promote it. i’ll give y’all 24 weeks. hell, i’ll give you 24 months. might as well call it your last show because we’d bury you. @TRAPTOFFICIAL

I thought this power trip band was some local band, 😂…. Okay so you have a metal label promoting you and you play for the same metal heads who go to all the same fucking metal shows… why can you only do numbers in the Bay Area?? Your spotify and Pandora number are low AF…

Festivals don’t count…. we have pics like that for days. Has to be a headline show to count