Sarah Palin Revealed As the Bear on The Masked Singer: Watch 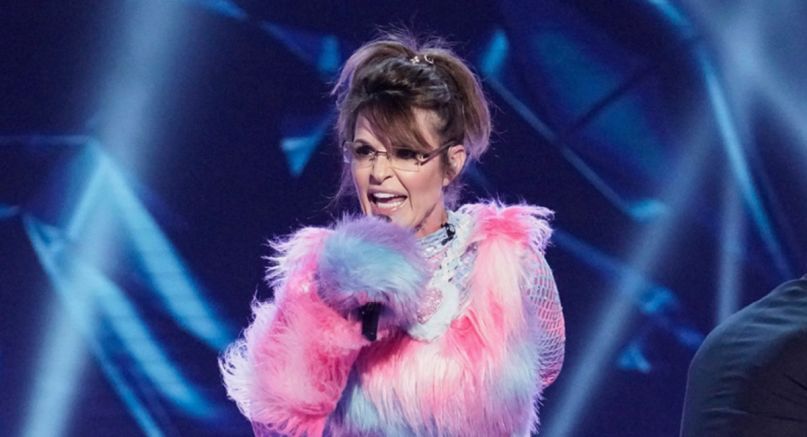 Sarah Palin on The Masked Singer

The Masked Singer has delivered some curveballs with its surprise guests, but Wednesday night’s elimination may have revealed the most unexpected face to date. After rapping through a gender-flipped rendition of Sir Mix-A-Lot’s “Baby Got Back”, the Bear was revealed to be Sarah Palin. As in, former Alaskan governor and vice presidential candidate Sarah Palin.

Similar to past masked contestants like Robot Lil Wayne, celebrity judges couldn’t place the voice. In this case, that seems to be expected. After watching a reel of clues which included ice skates, a mini van, and cards displaying a full house, the guesses became far reaching.

Based off the clue of ice skates, judge Ken Jeong thought the masked performer might be former figure skater Tonya Harding, noting there could be a tire iron in the mini-van. As the audience teetered on a boo, he joked, “Born to hunt, baby, you gotta do what you gotta do to win.” (Somebody clearly hasn’t seen I, Tonya.)

Oddly enough, Robin Thicke chose Tina Fey (close, kind of?) as his guess. “I’m getting more of a funny lady vibe, someone from the SNL family, she mentioned being a mama bear, protecting her cubs,” he said. Other guesses included Full House’s Candace Cameron Bure, and Christina Applegate.

Of course when Palin finally removed her bear mask, the audience and judges alike were basically stunned. “This might be the most shocked I’ve ever been on this show,” Cannon commented. When asked about why she chose the Bear, Palin said it was part of a childhood nickname, and “the whole ‘Mama Bear’ thing, and they’re in Alaska.” Palin continued, “They’re in their front yards. Bear was easy.” The politician and budding pop star also mentioned feeling thankful for the show allowing her to “exploit men” by changing up the lyrics to Sir Mix-A-Lot’s tune.

The Masked Singer isn’t Palin’s first dance with non-politics related TV appearances (some she wasn’t even totally aware of, like her interview with Sacha Baron Cohen on Who is America?). Let’s not forget she even had her own reality show, Sarah Palin’s Alaska. However, her performance as the Bear might’ve taken things to a new level.

“This is the weirdest thing I’ve ever done, that’s for sure,” Palin joked during the credits, wrapping slightly sentimental (or political) note, “It’s all about fun, it’s unity, this is all good. This is something that our country needs right now, too.”

Watch Palin’s clips from the show below, including the surprising reveal, and more importantly, her performance of “Baby Got Back”.

Previous Story
Bikini Kill Postpone Part of Tour Dates Due to Coronavirus
Next Story
Pearl Jam Knew What They Were Doing on No Code, Even if I Didn’t
Popular
More Stories
[fu-upload-form form_layout="media" title="Submit Your Photo"][input type="hidden" name="ugc" value="1"][/fu-upload-form]