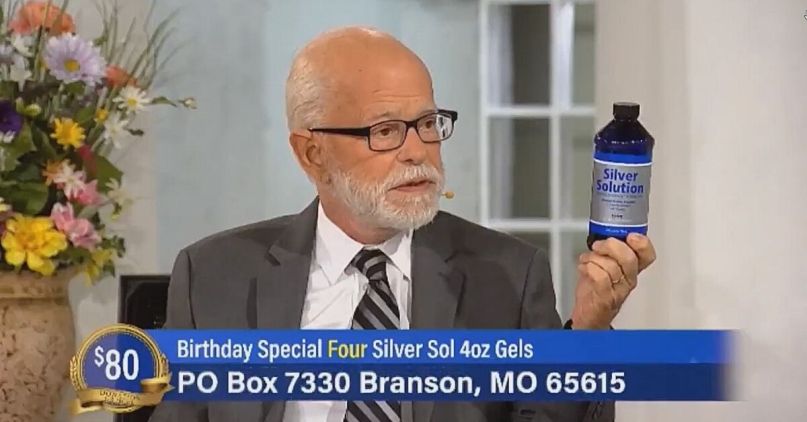 The Office of the New York Attorney General has ordered televangelist Jim Bakker to stop selling a fake cure for the coronavirus.

According to NBC New York, the cease-and-desist notice came after Naturopathic Doctor Sherrill Sellman appeared on The Jim Bakker Show promoting some quackery called “Silver Solution”. Bakker sells Silver Solution on his website for $125, and he brought Sellman on the broadcast to explain why people should give them both money.

Sellman provided a number of not-exactly-medical reasons, but the New York AG was especially interested in one particular exchange. When Sellman was asked if her product could protect people from the Covid-19 strain, she responded, “Let’s say it hasn’t been tested on this strain of the coronavirus, but it’s been tested on another strain of the coronavirus and has been able to eliminate it within 12 hours.” This, as you may have guessed, was a lie.

Silver Solution is made of colloidal silver — tiny silver particles suspended in liquid. It’s not much more complicated than small bits of dental fillings floating in corn syrup. Sellman has been hawking the stuff for years, and in a 2018 infomercial, she touted its miraculous medical range. “The silver has been proven to help with e-coli, to help with MRSA, to help with fungal infections, to help with various viruses, sexually transmitted diseases…” and so on.

According to the Mayo Clinic, “Colloidal silver isn’t considered safe or effective for any of the health claims manufacturers make. Silver has no known purpose in the body. Nor is it an essential mineral, as some sellers of silver products claim.”

As for Jim Bakker, this isn’t the first time the prominent televangelist has run afoul of the law. In 1989, Bakker was indicted on federal fraud and conspiracy charges after he embezzled $5 million from his church. He was initially sentenced to 45 years in prison, but the sentence was later reduced to eight years, of which he served only five.

Bakker now has 10 days to comply with the cease-and-desist order, or faces a fine of up to $5,000 per infraction, like false advertising and sales made using false advertising. Notably, he is still allowed to sell the silver, as anyone is allowed to sell tiny particles of mostly-safe metals, but he must add a disclaimer saying that the product hasn’t been evaluated by the FDA, and that it is not intended to prevent or cure any diseases.

The novel coronavirus continues to cast a long shadow over the entertainment industry. The city of Austin recently cancelled SXSW, and Miami axed Ultra Music Festival out of fears that the crowds would accelerate local outbreaks. This is no longer a hypothetical concern for some Tool fans, since a man who attended a February 28th Tool concert has tested positive for the disease. Coronavirus is the reason Justin Bieber gave for downgrading his stadium tour to arenas, but on the other hand maybe it’s just his shitty music.