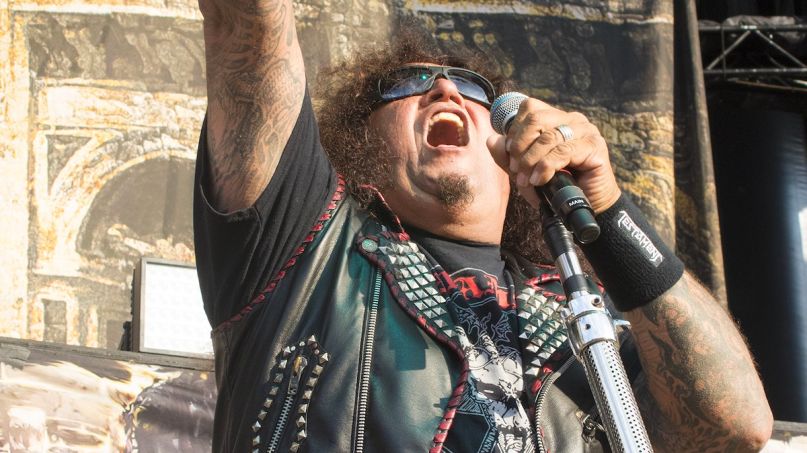 Last week, Testament announced that singer Chuck Billy had contracted coronavirus, as did his wife and a few of the band’s crew members. Now, Billy is detailing his fight with COVID-19, and offering an update on the conditions of his bandmates and members of other metal acts who recently toured with Testament in Europe.

Testament had been on tour with fellow Bay Area thrash legends Exodus and Death Angel in Europe, wrapping up the trek a few weeks ago, as the coronavirus pandemic became more widespread. In a new interview with Rolling Stone, Billy offers a timeline of his symptoms and diagnosis.

Just one day after returning home to California from Europe, Billy started feeling the symptoms. “I had an achy body, headaches, coughing, tight chest, I lost my sense of smell and taste — the whole thing,” he recalled. He contacted his bandmates and crew, and found out several of them were feeling similar symptoms.

That’s when Billy and his wife, Tiffany, decided to get tested for COVID-19, using a drive-through station, and finding out a week later that they were both positive, as were a few members of their crew.

“From that point, we of course went home and quarantined ourselves,” Billy remarked. “They didn’t give us any medication, so we just rode it out. We just hunkered down. And we were fortunate enough to have friends and family dropping off groceries and food here and there.”

The singer says he’s started to feel better around three or four days ago, but still has to remain in quarantine. “Now I want to get out of the house,” added Billy. “The doctor says I’ve probably got a good four, five days left. And we should be OK to at least shop and wear a mask when we go out.”

Along with the news of Billy’s positive test, Exodus guitarist Gary Holt reported having coronavirus-like symptoms. As of Sunday, he was still awaiting results of his test. And Death Angel drummer Will Carroll was in an ICU on a ventilator, with Billy saying there have been no significant updates other than Carroll’s “blood pressure stabilized.”

Billy also believes that Testament bassist Steve Di Giorgio contracted coronavirus, although he wasn’t tested. “Steve Di Giorgio seemed to have all the symptoms,” explained Billy. “And when he went in, the doctor didn’t want to test him. But he has the same symptoms. So we assume that’s what it is.”

The Testament frontman also detailed the financial hardships bands are experiencing during this pandemic. “To not be able to get to go perform takes a hit on everybody,” said Billy. “So we’ll get through it. That’s all we can do. We have a new record coming out and decided to not postpone it and keep forging forward and stick with the plan of attack and get it out there.”

Testament’s new album, Titans of Creation, will arrive on April 3rd. The Bay Area thrash legends were kick off a North American tour with The Black Dahlia Murder and Municipal Waste in late April, but that tour has been postponed due to the pandemic.