The Chats Skip on the Check with New Song “Dine N Dash”: Stream 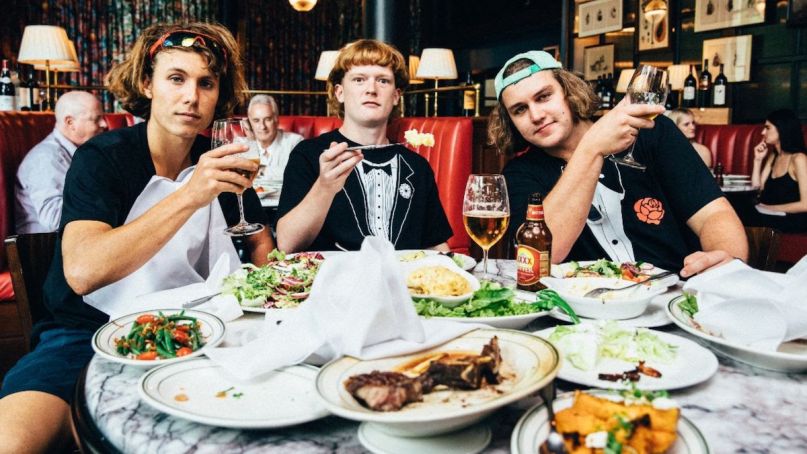 The Chats, photo by Matt Walter

The Chats didn’t choose to name their debut album High Risk Behaviour for nothing. Many of the effort’s songs do indeed focus on dicey life choices, like the lead single “The Clap”. The latest sample of the LP again finds the Australian punks throwing caution to the wind as they “Dine N Dash”.

A quick-hitting track that’s barely a minute and a half long, “Dine N Dash” has all the reckless, crude spirit of classic ’80s punk. There’s literally no depth to the cheeky lyrics (“Any restaurant/ Any time/ We can commit the perfect crime/ You just gotta run/ When ya done”), but that’s precisely how the Chats like it: Don’t over think it, just stuff your gob and book it.

The single comes with a Matt Weston-directed video that finds The Chats pulling the ol’ dine and dash at the extra-fancy Walters Steakhouse in Brisbane, Australia. “It was the best steak I’ve had,” said guitarist Josh Price. “Definitely gave the bowlsie a run for its money. No mushy gravy though.”

Added bassist/vocalist Eamon Sandwith, “Ya know you’re in a fancy restaurant when the chips and salad aren’t included.” Not that they paid for it either way.

High Risk Behaviour is due out March 27th via Bargain Bin Records/Cooking Vinyl Australia. The Chats will be supporting the album on a North American tour alongside our March Artist of the Month, THICK. They’ll also appear at Spain’s Mad Cool and California’s Coachella festivals. Find tickets to all their upcoming shows here.