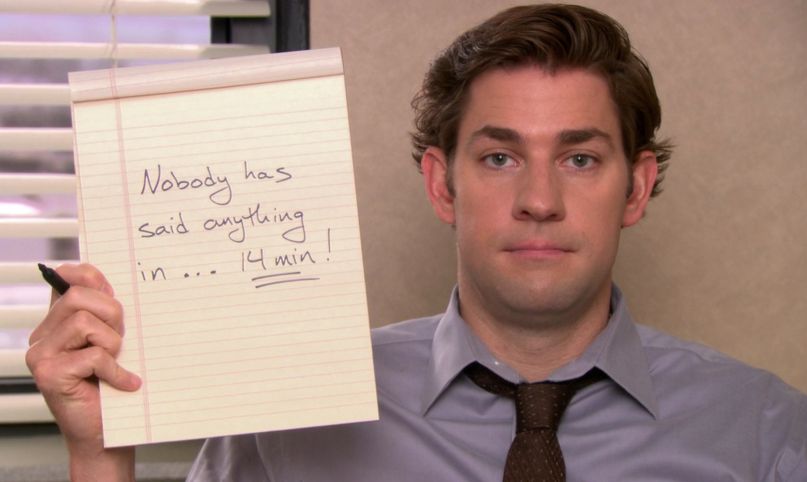 This week we’re celebrating the 15th anniversary of The Office. Also check out our ranking of the show’s 20 best episodes, a virtual Dundie Awards honoring its best moments overall, as well as essays on the show’s enduring legacy and why it still holds up in the #MeToo Era.

We’re at a strange point in American history: The coronavirus is raging across the country, and for everyone’s safety, most of us are self-isolating. We’re holed up in our apartments and homes, either working remotely or furloughed or otherwise jobless. For those of us who are new to the work from home life, though, we might actually miss the comforting drudgery of our offices: the hum of the copy machine, the awkward repartee between desk mates, the overbearing boss who wants to be your best friend and complete master all at the same time.

It’s a small blessing, then, that this month also marks the 15th anniversary of the premiere of the American version of The Office, one of the most seminal (and, judging by the $500 million Universal paid to get it off Netflix starting in 2021, most rewatched) sitcoms of the 21st century. In its first season, Greg Daniels’ adaptation tried a little too hard to ape the caustic, grim office nihilism of the Ricky Gervais original, but by Season 2, it settled into the sunnier, quirkier, longer-lasting incarnation we all know and love.

A key part of that, of course, was the show’s utter mastery of the cold open, little vignettes of life around Dunder-Mifflin Scranton that occasionally allowed us a sneak peek at the plot of the week, but more often than not just gave us a chance to live inside the quirks of its colorful characters. Whether it was one of Jim’s insidious pranks against Dwight, Stanley’s endearing grumpiness, or Michael Scott’s unceasing demands to be loved and admired, The Office‘s cold opens contained some of the show’s finest and most meme-able moments.

Now that many of us are considering an umpteenth rewatch of the show given the anniversary (and, frankly, America being glued to its couches at the moment), we thought we’d break down some of our favorite cold opens from the nine whopping seasons of the show’s history. (Season 1 didn’t have any cold opens, so it’s missing from this list.) Cook up a pot of Kevin’s famous chili, parkour hardcore your way over to a nice comfy chair, and let’s get this party started!

24. Meredith Gets Hit By a Car

The plot-based cold opens tend to be less interesting than the hijinks, but I’ll make an exception for Season 4’s opener. It does the heavy lifting of establishing the new status quo for the show (e.g. Michael’s return to work as manager, his domestic bliss with Jan, Jim’s return to the office), while putting a gut-busting button on the proceedings with an inattentive Michael slamming into Meredith with his car. The abruptness of the hit, Kate Flannery’s hilarious pratfall over Michael’s hood … just beautiful.

Mid-series Office liked to kick off its seasons with the Dunder-Mifflin employees replicating one Internet fad or another. Some were more successful than others (more on that later), but Season 7’s lip dub around the office to The Human Beinz’ “Nobody But Me” is an infectious way to reintroduce the characters. By this point, the coworkers had fully settled into their roles as an unlikely family, even with their more caustic quirks, so watching them work together for a fun maybe-viral video is a treat. That is, of course, until Dwight spends most of his time showing off his terrifying combat knife and holding it to people’s throats. Still, Magic Mike Scott saves it with a fireball flourish.

Season 5’s Michael Scott Paper Company arc was one of the coolest shakeups to The Office‘s status quo, and it’s honestly a shame it didn’t last longer than it did. Still, this cold open gave us a glimpse of the claustrophobic utopia that MSPC promised in its few scant weeks of operation, as Michael, Pam and Ryan killed time by perfecting the art of catching a cheese ball in your mouth. It’s dorky and impressive in equal measure, and one of the few times these three characters would have so much genuine fun together. (Plus, as the video above can attest, watching it in reverse is some real Lynchian stuff.)

The Office‘s yearly Halloween episodes were okay-to-great, with the Dunder Mifflinites dressing up in cheeky new costumes that befit the year’s trends (except for you, Jim, you cynical poser, no one’s impressed by how little you care). But Season 5 was the year The Dark Knight came out, so naturally not one, but three office weirdos dressed up as Heath Ledger’s clown prince of crime. Dwight’s is adorably tryhard, Kevin just looks like a normal party clown, but it’s Creed’s super-realistic, menacing take on Mr. J that crosses over into genuine disquiet.