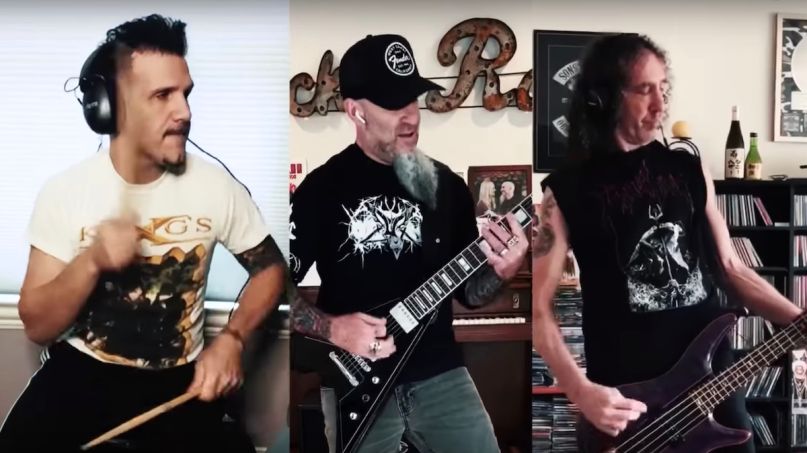 Anthrax members Scott Ian and Charlie Benante, along with the metal act’s former bassist Dan Lilker, have brought back their crossover thrash band Stormtroopers of Death for a “quarantine version” of the instrumental track “March of the S.O.D.”

Ian formed Stormtroopers of Death with Benante, Lilker, and singer Billy Milano in 1985, releasing their debut album, Speak English or Die, that same year. They would disband and reunite a couple of times, also releasing the LPs Bigger Than the Devil in 1999 and Rise of the Infidels in 2007.

Nearly 13 years after that last album, Ian, Benante, and Lilker have come together, via separate locations, to deliver “March of the S.O.D.”, the very first track on Speak English or Die and the intro music to the MTV series Headbangers Ball.

Along with video of the three musicians performing the track, Ian tweeted out, “A message from Sgt. D — Quaran-f*ckin-tine or you’re on my list.” Sargent D is the character Ian created that inspired the formation of Stormtroopers of Death.

As for Anthrax, the band had been hard at work on the follow-up to 2016’s For All Kings prior to the coronavirus pandemic. There’s been no new word on the status of the album or a potential release date.

Watch the “reunited” Stormtroopers of Death performing “March of the S.O.D.” below.