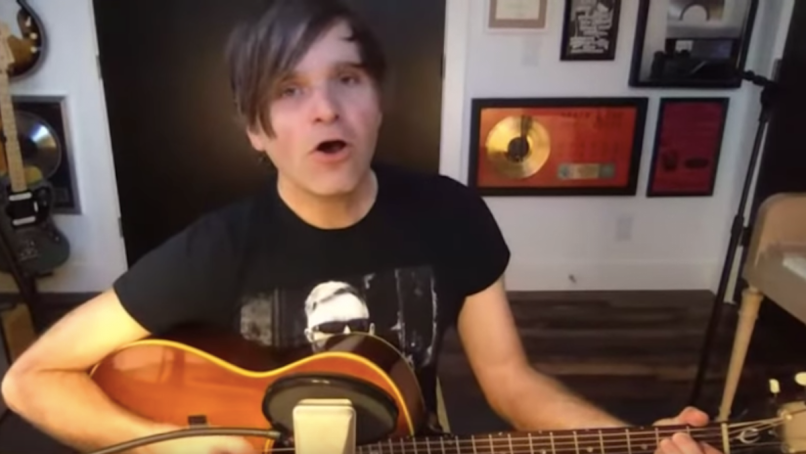 Schlesinger died Wednesday at the age of 52, of complications from COVID-19. Gibbard saved his eulogy for the end of the livestream, devoting ten minutes of the 50-minute set to discussing Schlesinger’s impact on his life and work. Gibbard told the story of a 21st-birthday road trip he took to San Francisco with his friend Kelly Huckaby. “One of the records we were listening to ad nauseam during that time was the first Fountains of Wayne record. We listened to it over and over again, it was so catchy.” After he got home, Gibbard wrote “Song for Kelly Huckaby”, which he played during Thursday’s livestream.

That 1997 road trip is why Gibbard selected “Barbara H.” from the 1996 album, Fountains of Wayne. Gibbard has a “vivid memory” of singing it while driving through redwood trees. Many years later, Schlesinger was instrumental in getting one of Gibbard’s songs to The Monkees, and he spoke movingly of how much that generosity meant to him.

“I never got to meet Adam. We had a lot of connective tissue, a lot of friends in common, but we never had a chance to actually meet. I owe him a huge debt of gratitude because he was integral in picking “Me & Magdalena” for The Monkees to record four years ago. I always thought, as one does in life, that you’ll have plenty of time to say ‘thank you’ or ‘I love you’ or to give somebody a compliment or what have you. And that day obviously did not come. But from the bottom of my heart, I’m so grateful to him.”

Elsewhere in the stream, Ben Gibbard quoted Netflix’s Tiger King, confirmed that his April solo tour is currently being rescheduled, denied rumors that he would be putting out an album this year, and said that the 2018 Death Cab song “When We Drive” is “kind of the little brother” to 2003’s “Passenger Seat”.

Thursday’s concert was dedicated to raising money for MusiCares, a non-profit that provides health care to musicians. Donate at the official website, and check out the full livestream and setlist below.

During previous livestreams, Ben Gibbard has premiered the new song “Life Under Quarantine”, played many Death Cab for Cutie standards, and covered Radiohead’s “Fake Plastic Trees” as well as songs by Phoebe Bridgers, The Shins, Elliot Smith, and more. Death Cab for Cutie still have summer dates on the calendar, and you can buy tickets here.

Setlist:
Lightness
Everything’s A Ceiling
The Ghosts of Beverly Drive
A Hard One to Know
When We Drive
Passenger Seat
Pictures in an Exhibition
Barbara H. (Fountains of Wayne cover)
Song for Kelly Huckaby