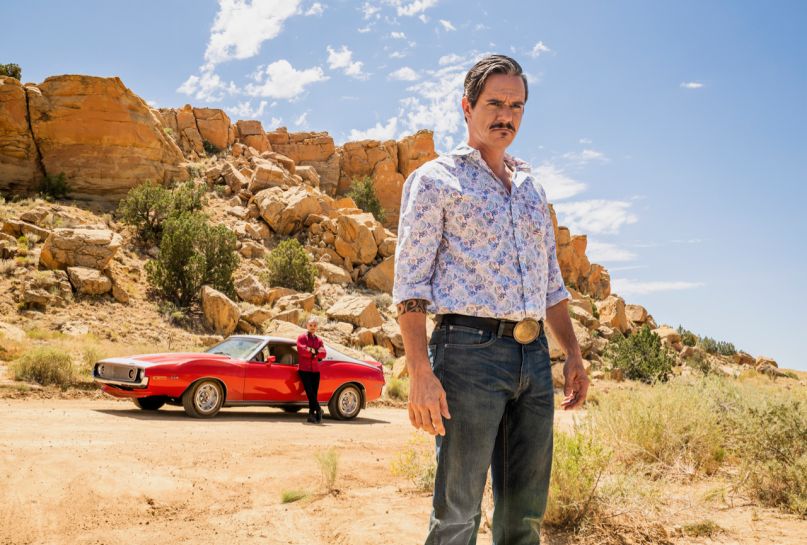 Tony Dalton is as charming in real life as he is on screen. Throughout our afternoon call, the Mexican-American actor, screenwriter, and producer beams with excitement and energy. He even riffs a little. “I’m getting the old Skype app out for unity, bro,” he cribs. “I thought it was gonna be on Hotmail.” Of course, none of this is surprising.

After all, Dalton plays one of the most enigmatic characters on television. As Lalo Salamanca, he’s the rare villain in the Breaking Bad universe to walk around with a smile on his face. Yet that demeanor is what makes him such a foil for the ever-chummy Saul Goodman, and it’s why their interplay has been a centerpiece of Better Call Saul.

Of course, that’s by design as Dalton tells us. He sees Lalo as Saul’s “mirror evil brother,” and that’s certainly not a stretch. All throughout Season 5, Lalo’s given Saul a run for his money — literally, as we saw in the now-iconic “Bagman” episode — and it’s been quite a joy seeing him steal every scene. He’s a mystifying force that’s downright hypnotic.

Below, Dalton weighs in on his breakthrough role and adds more insight into the jovial Salamanca member. He also offers a behind-the-scenes look at the way creators Vince Gilligan and Peter Gould operate out in Albuquerque, and shares the little things he’s snuck into his performance over time. So, stop tapping that fish tank and read ahead.

On life in quarantine

It’s a terrible situation what’s happening in the world right now with COVID-19, the deaths, and the economy being stopped. But as far as for actors, I mean, I can only speak for myself, right? But, I’ve been doing this for a while, and as an actor, your time off when you’re between jobs is kind of like this. You know? You’re unemployed, you’re just in your house, you’re waiting for your next job. So, this is normal for me, to be honest with you. Stay at home, cook, barbecue, play in the garden with the dog, and stuff like that, It’s a pretty chill kind of lifestyle — and this is sort of the way that I live.

On joining the Breaking Bad universe

I was [familiar with the show]. Everybody watched Breaking Bad. It’s one of the best shows ever made, and a lot of people think it is the best show ever made. So, it’s big shoes to fill, you know? It’s like the older brother that went to the good schools and the varsity teams, and you’re the younger brother, and you’re kind of saying, “No shit. I gotta step up here.” You know, I’m part of the same team and with the same guys.

You go out there in Albuquerque and these guys have been working together for 10 years now. They run a tight ship there and it’s unbelievable. I’ve worked in this business for awhile, and I’ve never seen anything like them. It’s like a fine-tuned machine, and to be able to throw in an extra spare part, which is Lalo, at the end of this, which is this last season and hopefully the next one … did the season feel special? It sure as hell felt special to me. I got the job and I’m here with the big boys.

On what he brings to Lalo

The creators are the writers. What I tried to do was … I binge-watched the whole thing, from Breaking Bad to Better Call Saul, and I thought, What’s missing here? What have we not seen?, and I realized the only person that was happy-go-lucky or charming was Saul. So, I figured, let’s try to do that, let’s try to have the mirror evil brother? The Jekyll and Hyde sort of thing? Let’s make this guy say the same lines that are written only with a little lighter step and with a less intensity. He’s still going to do the things he’s going to do on paper.

You only get one shot at this thing, especially with Americans, you know? So, I was like, “Look, I got this show, this is a big deal, it’s hit or miss here, especially when you’re in Season 5. It’s not the beginning.” So, I figured, let’s go for something that I’ve never done, and what seems like it’s never been seen in this universe. Let’s go with this sort of Jules Winfield/Samuel L. Jackson character [from Pulp Fiction]. “I’m sorry. Did I break your concentration?” Like, is he insane? What the hell? That kind of thing, you know?

It’s a collaboration. These guys are the guys who will have first and final word: the writers, the directors, you know? So, you show up there, you do your job, and you try to come up with ideas that you throw out there. I’ve done this my whole life. I don’t have a problem with people saying to me, “Yeah, no, don’t do that.” For example, in Season 4, when I’m in the car, and I finally get Werner Ziegler on the phone, Michael hangs up. What I did in that scene was I was speaking in a German voice: “Is that you?”  “No, no, no,” they said. “Don’t do that. Don’t do that. That’s not funny.” I was like, “Okay.”

So, they let you play, but they have you under control — which way to go, where it’s too much, where it’s not. And thank God because you have an idea, but the people that are behind the camera are the ones who are seeing what’s going on. That’s Peter [Gould] and the directors and the writers and the incredible crew that they have. So, you kind of show up there and throw dollar bills all over the place and see which one gets picked up.

On sneaking things in

I try to sneak in everything. I could tell you hours of all the shit I try to get past these guys, everything from waving people off with the hand and fingers or pointing with my mouth. That one I’m particularly proud of. I met this Cuban guy that I did a telenovela with like 15 years ago or something, and every time we were on set, he was like, “Who put that piece of paper there?,” and he’d point with his mouth. I was like, “Dude, I gotta use that one day.” So, I’m using all those things.

I do more of that in the last episode, but there’s all these tiny little things that I’ve tried in the past. Like, when I get out of jail and say [to Saul], “Hey, your wife came by to see me,” I pounded my chest and pointed at him. “Respect for somebody who marries that high up.” You know, those little things. I’ll just do them. They run a very tight ship as far as what’s written and stuff, but they also recognize if you’re doing something that works.

Even in Vince’s episode [“Bagman”], he was very open to things. When I’m sitting there with a guy, he’s like, “Hey, let’s do that. Let’s get your feet moving,” and when we start the scene, you’re watching the paper. I love that because it’s really, truly this collaboration where they trust what you’re doing and that you’re not gonna screw this up and do something ridiculous.

You earn that trust. It’s not like you show up there from the first day and start doing it. You’re very respectful, and that’s one of the wonderful things about this job is finding a way to communicate what you want, to maybe propose or set something for the character, and seeing if the director, the writer and the people around accept it and like it.

On his theater background

Theater is a good idea all around. It makes you comfortable with everything in acting, from the blocking to taking directions. It’s like, tell me what you’ve done for the past 4,000 hours, and that’s what you do for a living. If you’ve been doing theater for a long time, as an actor, you’re very sensitive and aware of everything that’s going on around you because you’ve been doing the craft for so long.

Theater is very different than anything else because you’re more exposed and you’re not protected as much. It’s a little more balls out. In TV, you can do another take, you can go back and change it if you don’t like what you did. In theater, it’s like, “Okay, you get this one shot, make sure you get it right, don’t fuck this up. Alright, let’s go out there.”

On the anxiety of working script by script

Well, you don’t know if you’re gonna fucking die, right? Am I unemployed? It comes with the job; unless it’s a movie and you’ve already read the script. Hell, even that! I got a buddy of mine who just did a Woody Allen movie a year or two ago, and he’s like, “Dude, I never read the script. I was on the set, and they’d give you the scenes the day before so I didn’t know what the hell it was about.” So, you play with what you got. You could read it and you’re dead and that’s it. You never know.

I don’t care who the hell you are, every single actor does the same thing: Before you read the whole script, you breeze through it to see how much of [your character] is in there. And every time this season, there was more Lalo, more Lalo, more Lalo. I was like, “Wow, these guys are very happy with with this character. This is amazing. Never in my wildest dreams did I think it would get this big.” With the “Tell me again” scene [at the end of “Bad Choice Road”] I never saw it as this profound moment. Now, in hindsight, I guess that was a little of a moment there. But, every single thing that you do as an actor for a character … you try to make it their moment. So, you don’t know which one’s gonna stick out more than the other.

On that big jump

I did say to [director Thomas Schnauz], I said, “Dude, let me do it,” and he said, “No way. There’s no way you’re doing this.” So, I said, “At least let me stand at the edge of the cliff.” He said, “No, sorry.” They did let me stand, but I had to have this harness and I was like, “Come on.” He said, “Dude, it’s not even about me. It’s the insurance and the safety. I can’t let you do this shit. If you can’t do this off-screen, why would we let you do it on-screen?” Because, it’s not like you can go skydiving the next day when you have a job. You have to be really careful because you can get hurt or something and a huge production goes to a standstill because you were reckless.

On whether COVID-19 will affect Season 6

I don’t think so. I mean, I don’t know, but so far, so good. We were always going to start in September, and I think we still start shooting in September. So, we’ll see.