Carlile covers "Summer's End", and Maines sings "Angel from Montgomery" with her kids 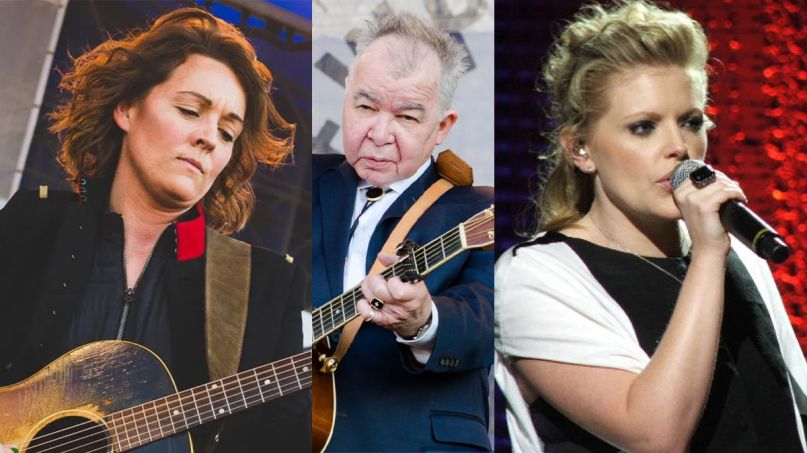 John Prine passed away on Tuesday, losing a battle with coronavirus that lasted several weeks. The music world was paying tribute to the folk icon even before his death, with Jim James, Joan Baez, and Big Thief’s Adrianne Lenker covering Prine’s songs back when he was first hospitalized. Now that he’s gone, more musicians are singing in honor of the late legend, and last night saw Brandi Carlile and Dixie Chicks’ Natalie Maines add their voices to the chorus.

Carlile’s connection to Prine is very real, as she appeared on “Summer’s End” from his final album, 2018’s The Tree of Forgiveness. The pair performed the song together numerous times, including once alongside Sturgill Simpson on Colbert. “I’m gonna miss singin’ this one with you John so tonight I’ll sing it to you,” she wrote on the Instagram post sharing her delicate solo rendition.

As for Maines, the Dixie Chicks leader was joined by her sons, Jackson and Beckett, for a cover of the classic “Angel from Montgomery”. “My kids got introduced to John Prine tonight and helped me do a tribute,” she wrote. With Beckett fingerpicking above the scene and Jackson strumming along to the right, the family band delivered a beautiful rendering of which Prine would have been proud.

Watch both Carlile and Maines’ Prine tributes below. Like the Dixie Chicks member, Wilco’s Jeff Tweedy was joined by his two sons Tuesday night as he honored Prine with a cover of “Please Don’t Bury Me”.

My kids got introduced to John Prine tonight and helped me do a tribute. I❤️John Prine. R.I.P. @jack_slade__ @beckettfinnnn