And why the youth vote matters 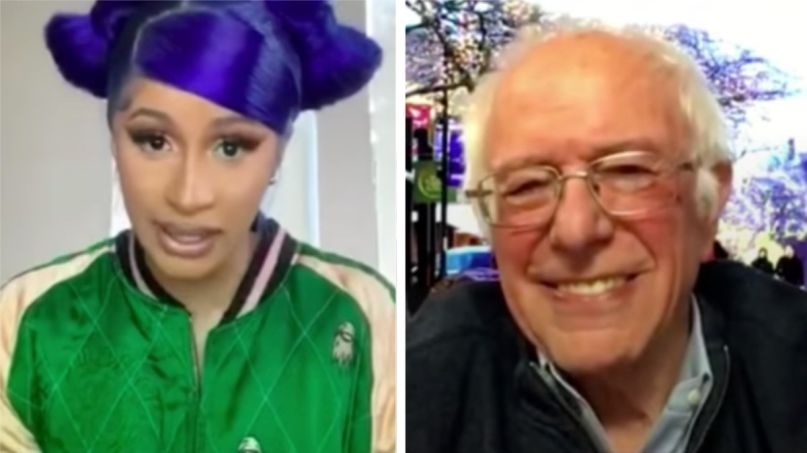 Cardi B and Bernie Sanders

Cardi B has interviewed Bernie Sanders once again. Whereas their chat last summer took place in person, this time they caught up on everything from coronavirus to Joe Biden over a FaceTime livestream taking place on Tuesday night.

The rapper kicked things off by poking fun of “Uncle Bernie”, saying she can tell he’s been quarantined for too long, before recounting how upset she was the day she heard he dropped out of the race. From there, Cardi B grilled Sanders on a handful of pressing topics: the economic impacts of coronavirus, the state of the US healthcare industry, the difficulty of voting for someone you don’t fully support, and the ultimate need to get Donald Trump out of office. After hearing her do so, it’s no wonder Sanders approves of Cardi B’s desire to enter politics.

“I keep telling my supporters and the youth that you guys really gotta go vote,” said Cardi B. “I’m just gonna go with Joe Biden now because I cannot see the next step of America being run by number 45. I think we’re going to answer our recession [sic]. I really think that. So many people are unemployed right now. And of those people that are unemployed, not everybody’s going to get their job back when American opens back up.”

Later in their conversation, Cardi B criticized America’s prevention methods for COVID-19 compared to those for the ebola virus. “When coronavirus was becoming trendy in America — it was around early January — a lot of people felt like it would be racist or prejudice to close to borders from China to America,” she said. “How come it wasn’t prejudice when America closed the borders in West Africa when the ebola virus was around? The ebola virus never even got here. I feel like they put capitalism, money, trading, goods before our health now. That’s my problem.”

Watch the full interview below. (The conversation kicks off around the 37-minute mark and lasts for about 16 minutes total.)

This year will see Cardi B *hopefully* release her follow-up record to Invasion of Privacy. The new album is already one of the most anticipated albums of the year, but fans will have to be patient to hear it — it’s been pushed back due to coronavirus and widespread quarantine rules. Might as well get familiar with Biden’s latest antics to help run out the clock until then.