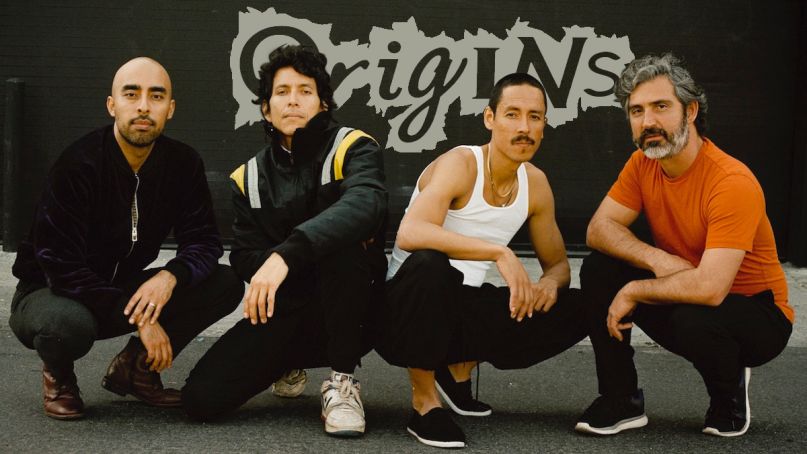 In our exclusive new music feature Origins, we give musicians an opportunity to reveal some of the inspirations behind their latest track. Today, Chicano Batman discuss how they filled their “Blank Slate”.

Chicano Batman are set to release their new album, Invisible People, on May 1st via ATO Records. Following previous sample singles “Color My Life” and “Pink Elephant”, the band is back with “Blank Slate”.

“It was the first song that we dug our heels into,” lead vocalist Bardo Martinez tells Consequence of Sound of the new track. “It was our Blank Slate… so I also approached the lyrics from that angle but applied it to my personal life at the time to create the typical love song dance jam.”

The track strolls in on a muted disco vibe, like the lights are just coming up on a smoky dance floor. As the first chorus announces itself with the lines, “I just want to love you/ I need you to love me,” the sultry funky rhythm grabs hold of your hips, gyrating to the sultry groove.

Check out Chicano Batman’s “Blank Slate” below, followed by the band’s in depth Origins of the song.

I wanted to rock the bass the way Slave or Rick James would. The song always felt like a dance joint so there was room to get freaky with it. In the studio, I scratched my demo bass line and started acting the fool by slapping the bass and exploring other cliche riffs. With Leon Michaels in the control room, we found a balance between pump and nasty. — Eduardo Arenas

Michael Jackson — “Rock with You”:

I was inspired by John Robinson’s drumming on “Rock with You.” I even had the pleasure to throw in some extra chilli pepper for the intro after Leon and the band suggested adding a drum fill going in. The result was tasty and spicy! — Gabriel Villa

“Blank Slate” has an underlying galloping drum machine beat that I found very reminiscent of Kraftwerk’s “Trans-Europe Express.” That electronic feel inspired me to approach my guitar parts for the verses in that vein but with a funk accent. For the chorus, I wrote rhythm guitar parts that were more straight ahead 80’s funk inspired, specifically Prince’s stellar guitar playing on “Controversy.” And lastly, for the guitar solo, I again looked to electronic music for inspiration, this time Daft Punk. I tried to emulate a mono synth type of sound that you might hear on the lead melodies of a song like “Da Funk” or “Human After All”. For “Blank Slate” many people think it’s a synthesizer playing during the solo section but it’s actually my guitar with two fuzz pedals through an octave pedal. — Carlos Arevalo

I was in the studio one day (months before we started compiling songs for this record) and I set myself to the task of putting together a track that Miguel (“Skywalker”) would sing to. (This was after we had done a special feature with him where we played each other’s songs.) The sound had to feel modern and sexy. I used this drum machine from my CASIOTONE keyboard (the one you hear on Blank Slate) and I remember stacking tracks with the same chords so it would feel symphonic or wide sounding like a JUNO on my tape machine. I also thought of a lead melody that I recorded with a monophonic synth, and I stacked them for dramatic effect. We never sent the track to Miguel, but I’m sure all of us would be cool with him catching a vibe on it… REMIX! But I remember showing Carlos, and he dug the intention. The track was bare bones, a good framework. The intention was modern funk, and everyone knocked it out the park. — Bardo Martinez