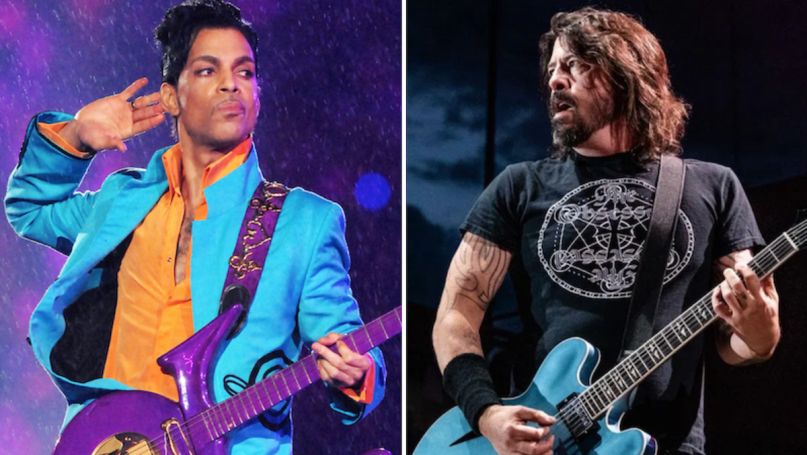 Dave Grohl has been whiling away his time in self-quarantine by penning True Short Stories for his @davestruestories Instagram account. Thus far, he’s shared embarrassing anecdotes about 4th of July fireworks gone wrong and hanging with Pantera at the heavy metal band’s strip club. The Foo Fighters frontman’s latest tale reveals the heart-pounding story of his one and only jam session with the late, great Prince.

Like so much classic writing, the story begins at the end, with Grohl meeting Prince backstage during his unheard of 21 night-stand at the Los Angeles Forum in 2011. Grohl recalled being given “a proposition that I had wished for my entire adult life, but never in my wildest dreams imagined possible. Jam. With. Prince.” A bewildered Grohl compared it to “dancing with Fred Astaire! Baking with Betty Crocker! Bong hits with Bob Marley!” But the session wouldn’t be for another week, leaving him seven whole days to stew in anticipatory anxiety.

Grohl initially thought he’d landed on “Prince’s esteemed ‘shit list'” after Foo Fighters released their rendition of “Darling Nikki” as the B-Side to the Australian “Have It All” single. Prince had apparently denied giving his blessing to the cover, saying, “They should write their own tunes…”

However, his worries were wiped away when Grohl received a call from his manager on February 1st, 2007 telling him Prince was going to play Foo Fighters’ “Best of You” at the Super Bowl Halftime show. Grohl almost “wrote the whole thing off as something that was too good to be true,” feeling the Foos’ tune would be the “red-headed stepchild” placed between Bob Dylan’s “All Along the Watchtower” and “Purple Rain” at the end of Prince’s legendary set. Grohl didn’t even watch the broadcast live, instead waiting till someone confirmed Prince really had played “Best of You” before watching on his computer:

“As my tears hit the keyboard like the Miami rain that night, I realized that this was without a doubt my proudest musical achievement. All of those years spent in my bedroom practicing alone to Beatles records, sleeping in cold, infested squats on winter fan tours across Europe, battering my drums until my hands literally bled… it all paid off in this moment. I was watching the greatest living performer known to man sing my song to 1000 million people as if it were his own… Volumes have been written about his performance that day, as it truly was the best halftime show in history (sorry, JLO) But to me, I will always remember it as my life’s greatest compliment.”

Four years later, Grohl rented a party bus packed with friends to catch one of Prince shows. A good friend of his, Kerwin, happened to be running security that night, and told Grohl, “Hey, he knows you’re here… He’s gonna call you up onstage to jam.” Unfortunately, Grohl was preparing for a different sort of epic night and “was fuuuuuuuucking hammered. Not sober. And there was NO WAY I was going to step onto Prince’s stage in that state.”

“Thank you, I’m beyond honored, but I’ll see you after the show,” Grohl told Prince via Kerwin.

It was after that performance that he met Prince and Shelia E. backstage and was told to come jam “next Friday.” Though he received no confirmation call or instructions, Grohl arrived at the Forum and was told to wait in a dressing room set aside just for him. Too wound up to sit still, Grohl found himself wandering to the stage to check his gear. “And then… just like Fred Armisen’s infamous “Prince Show” skit on SNL… he appeared. (This is no exaggeration, folks. I swear the dude moved like a Navy SEAL. He just… materialized.)”

Prince asked Dave if he wanted “to play some drums,” so Grohl climbed behind the “[Megalodon] sized kit (like one of those drum sets you see at your local music store that costs more than all the Kardashian’s implants combined).” He started playing a simple groove as the rest of the band came on stage and “Prince watched, inspecting me with a grin.” The Kid then strapped on a bass “and proceeded to decimate the damn thing with the smoothest, funkiest, fastest, most graceful playing I have ever seen to this day. He was on me like glue. Like a fresh roll of Gorilla tape.”

Though there was “not a soul in sight to witness it,” the whole band locked into a “symphony of rock/funk/gospel/psychedelia.” Everyone cheered at the end, and Prince joked that Grohl “got a heavy foot!” Prince then walked over to his Love Symbol guitar and began playing the opening riff to Led Zeppelin’s “Whole Lotta Love”. Grohl, a mega Zeppelin fan with “arms full of Zeppelin tattoos,” was in heaven.

“It fucking SLAMMED,” Grohl beamed. “Fat, funky, big bottomed swing as he let loose solos that would make your teeth curl. My rock and roll fantasy was coming true, and I couldn’t FUCKING wait to share it with an arena packed full of die hard Prince fans like myself!”

Prince suggested Grohl return “next Friday” again to play for the crowd — but for whatever reason, Grohl never did. He concluded his story, writing,

“In a strange way, I didn’t need to. I had fulfilled a life dream, with no evidence of it to share with anyone, other than a memory that will stay with me forever. I only saw Prince once after that. We just smiled and said hello. And when I heard he had passed, I sat in my care alone, crying, feeling both blessed to have shared these moments with him, and heartbroken that there would be no more. There will never be another like him. We were lucky to have him while we did. I miss him dearly.”