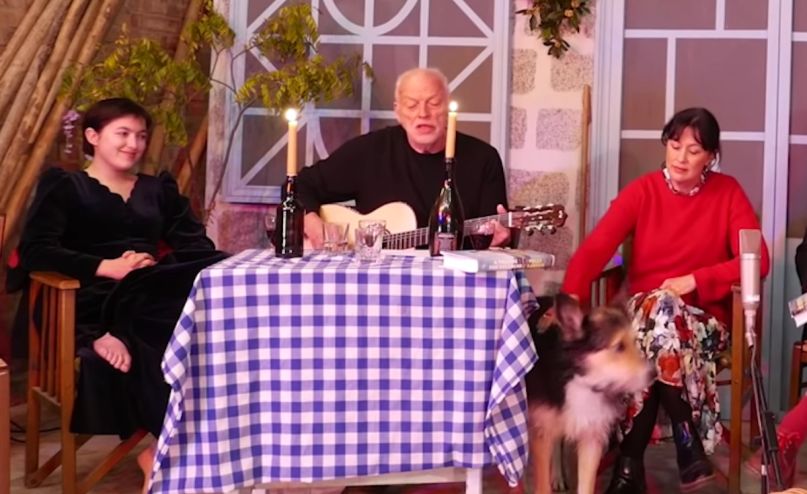 David Gilmour covered two classic Leonard Cohen songs last weekend, and he did so with help from his entire family.

The covers took place during a livestream event for Gilmour’s wife, Polly Samson, who was promoting a new book called Theater for Dreamers. Samson was originally supposed to celebrate her project with a public event at London’s Central Hall Westminster, but due to the COVID-19 pandemic, she opted to take the festivities online with assistance from the Pink Floyd rocker, their children, and yes, even the family dog.

In between Samson’s talks about the actual book, Gilmour took up his guitar and performed Cohen originals “Bird on the Wire” and “So Long Marianne”. Daughter Romany provided harmonies on both songs while Samson and their youngest child looked on.

The tie-in to Cohen stems from Theater for Dreamers, which is set on the Greek island of Hydra, where the legendary songwriter lived at one point. In fact, as Rolling Stone notes, “Bird on the Wire” was partially written on Hydra, while “So Long Marianne” is about a relationship with Marianne Ihlen, whom Cohen met on the island. Cohen reportedly is even a character in Samson’s novel.

Watch the livestream below (scroll to 7:46 for “Bird on the Wire” and 30:08 for “So Long Marianne”). The set was made to look like an actual cafe on Hydra.