In the accompanying video, Drake self-isolates in his mansion 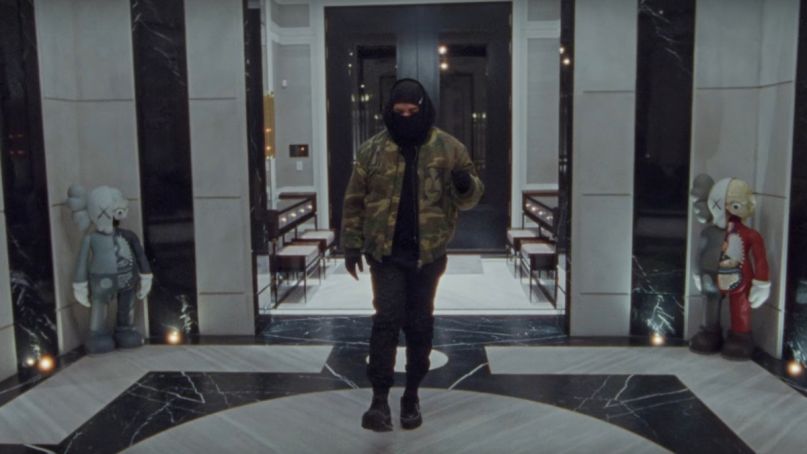 Drake in video for "Toosie Slide"

Drake knows the secret to setting nearly every all-time record is to make your music go viral. It should come as no surprise, then, that he just dropped a new song called “Toosie Slide” and it’s already earned a TikTok dance.

This is the sixth standalone track Drake has released in 2020 already. First were his Future collaborations “Life Is Good” and “Desires”. Next came two solo tracks, the JAY-Z sampler “When to Say When” and the verbose “Chicago Freestyle”. Then, last but not least, he danced his way to fame thanks to a feature on DaBaby’s hit “Oprah’s Bank Account”.

Musically, “Toosie Slide” is barebones trap number made from stuttering cymbals and a couple bass drum kicks, leaving room for Drake’s lyrics to take the spotlight. The Toronto rapper lists off random allusions to dancing before the chorus kicks in and he teaches listeners how to groove to the song: “Right foot up, left foot slide/ Left foot up, right foot slide/ Basically I’m saying either way we ’bout to slide.” Stream it below to hear for yourself.

All things considered, this “Toosie Slide” dance is super easy compared to the “In My Feelings” challenge, which left people dangling from car doors. No wonder some fans want to step it up a bit, turning Drake’s new single into the perfect platform for some pre-chorus and post-chorus soloing. When Drake revealed the release date this past Tuesday, he also tagged social media influencer Toosie — who promptly uploaded the dance routine to his own account with some added flair. TikTok kids saw Toosie’s moves and, well, the rest is history in the making.

Update: Drake has also shared a video for “Toosie Slide”. It features Drake self-isolating at his mansion, complete with gloves and a mask, doing the song’s dance steps.

Of course, there’s no better time for Drake to drop a simple dance number than in the middle of a global coronavirus pandemic. The rapper has been self-quarantining for weeks after possibly being exposed to COVID-19 through Kevin Durant, one of four Brooklyn Nets players who tested positive for the virus. He’s antsy to get out, though, so he can reunite with his son Adonis, who he finally revealed photos of for the first time ever.

#ToosieSlide around the house 🕺🏾💨 @champagnepapi