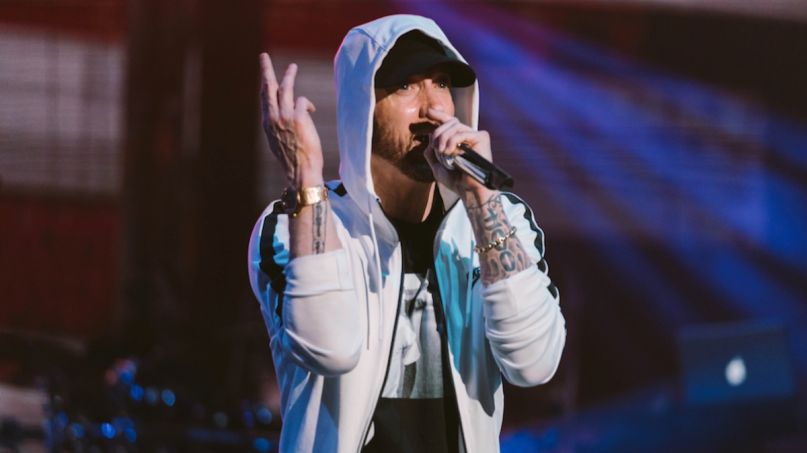 Eminem spends a lot of his songs puffing up his chest to flaunt how masculine he is. In an unfortunate turn of events earlier this month, the rapper got a chance to prove at least one tough-guy anecdote is true when a home intruder broke into his living room and he caught the guy red-handed.

According to police, the break-in occurred at 4:00 a.m. one night this April at Eminem’s house in Detroit. The suspect, 26-year-old Matthew David Hughes, entered the gated community, snuck past security guards on Eminem’s property, smashed a kitchen window with a paving stone, and then climbed inside the house. The ruckus set off an alarm system that quickly woke Eminem, reports TMZ.

Instead of freezing up or fleeing his own property, Eminem decided to confront the intruder in his home. He wandered the house and wound up spotting Hughes in his living room. Hughes was then “detained” and grabbed by the security guards, who heard the commotion and ran inside. Nothing was stolen and nobody got hurt.

Once police showed up, Hughes was taken into custody and booked on two felony charges: first-degree home invasion and malicious destruction of a building. As it turns out, he wasn’t looking to steal anything from Eminem. Instead, he just wanted some face-to-face time with the rapper. Technically he did get a few minutes, if not seconds, worth of time to hang with The Slim Shady star… for the cost of a $50,000 bond at the Macomb County Jail.

This is the latest surprise in an already unexpected year of Eminem news. He gave a random, unannounced performance of “Lose Yourself” at the Oscars, dropped a  surprise new album and then penned an open letter defending it, joked about the Ariana Grande concert bombing, and then let himself get knocked out by Mike Tyson in the “Godzilla” music video.

Eminem has been comparatively quiet since the coronavirus pandemic reached North America. In fact, the only time he peeped up was to do some good: donating his mom’s legendary spaghetti to local hospitals in Detroit.