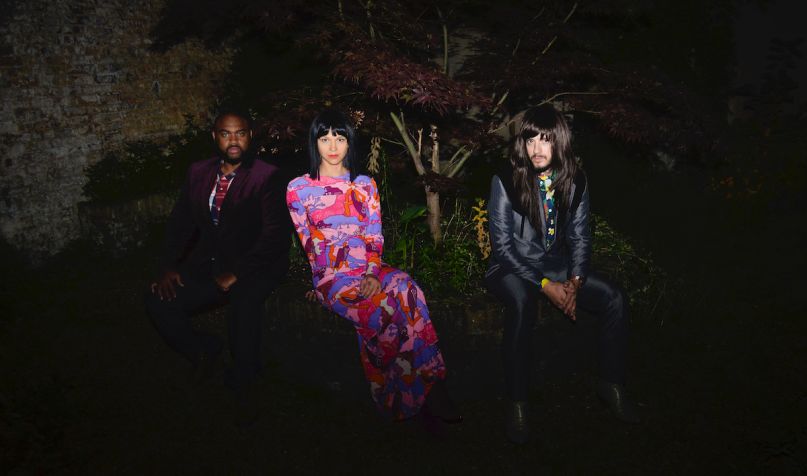 Psychedelic funk trio Khruangbin have announced a new album, Mordechai. With the LP dropping June 26th via Dead Oceans, the band have today shared the lead single “Time (You and I)”.

The new record was inspired by an encounter bassist Laura Lee had with a near-stranger. According to a statement, a man named Mordechai invited her to go hiking with his family to a distant waterfall. As she jumped into the water at Mordechai’s encouragement, she screamed her full name — Laura Lee Ochoa — in a moment she compared to a baptism. Her heritage reclaimed, the newly-rechristened Ochoa left the waterfall overflowing with words that went on to fill hundreds of notebook pages. The question was what to do with them.

The band’s previous full-lengths, 2015’s The Universe Smiles Upon You and their 2018 breakout Con Todo el Mundo, were almost entirely instrumental efforts. But following this transformational experience — and after partnering with Leon Bridges for the February EP Texas Sun and producing Jay Electronica’s “A.P.I.D.T.A” — the band was ready to embrace the potential of the human voice.

“Time (You and I)” features Ochoa’s vocals singing lyrics that celebrate the fleeting nature of existence: “That’s life. If we had more time/ We could live forever.” It’s a song about staying in the moment, trying to “play like children play.”

The accompanying music video was directed by Felix Heyes and Josh R.R. King, and follows a pair of adults (comedians Stephen K. Amos and Lunda Anele-Skosana) on a childlike mission. Carrying a briefcase full of sand, they travel around the city of London building sandcastles in unlikely places.

Check out Khruangbin’s “Time (You and I)” below. Pre-orders for Mordechai have already begun, and the album art and tracklist are ahead.