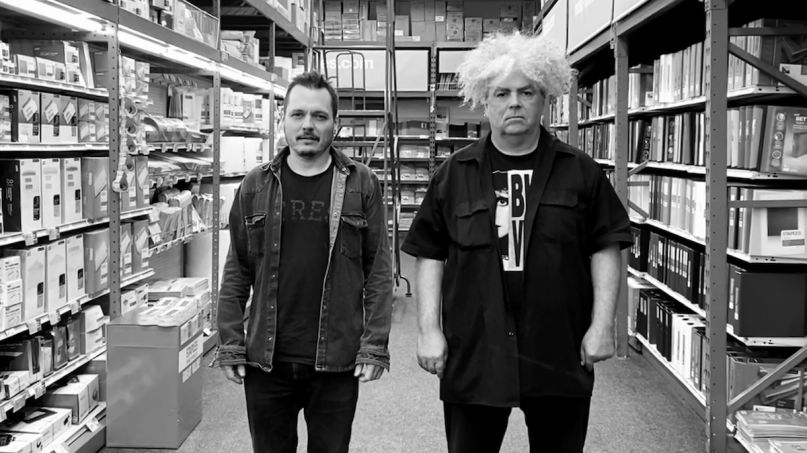 Melvins frontman Buzz Osborne, aka King Buzzo, has teamed up once again with Mr. Bungle bassist Trevor Dunn for Buzzo’s second acoustic solo album, Gift of Sacrifice. The duo is premiering the single “I’m Glad I Could Help Out” exclusively via Consequence of Sound and Heavy Consequence.

The song is a twisted take on acoustic folk, with dissonant musical phrasing and washes of strings that harmoniously clank and clack. Meanwhile, Buzzo’s ominous vocals are densely layered and refracted through a multitude of effects.

The results are a bizarre electro-acoustic concoction befitting of the Melvins singer’s adventurous nature. To top it off, a clean solo calmly glides over the mix, complementing the percussiveness of the rhythm guitars.

“I did a lot more production on the vocals with this than I normally would, which I think came out really well,” Osborne said of the track. “I like the guitar solo particularly.”

The presence of Dunn, a longtime practitioner of left-field rock (and Buzzo’s bandmate in Fantômas and Melvins Lite), contributes to the obliqueness. Both the new track and previous single “Science in Modern America” percolate with a kinetic uncertainty that’s both mischievously pleasurable and an affront to the tired tropes of acoustic-based folk.

“‘I’m Glad I Could Help Out’ is the only song on the album that was done in a single take,” Osborne added. “Trevor and I recorded this in one live session and I couldn’t have been happier with what the result was.”

The accompanying video is a stark black-and-white short directed by Jesse Nieminen (“My partner in crime,” Buzzo said). The video adds a gloomy, macabre overcast to the single’s presentation. It’s a striking piece of art cinema in its own right.

Gift of Sacrifice was originally slated to arrive on May 15th, but will now be released on August 14th. Pre-order Gift of Sacrifice via Ipecac Recordings, and watch the video for “I’m Glad I Could Help Out” below.

“I’m Glad I Could Help Out” is not the only new music from Buzz Osborne. He and Melvins bandmate Steven McDonald guest on the new track “Down the Middle” from Pearl Jam drummer Matt Cameron’s upcoming solo album.