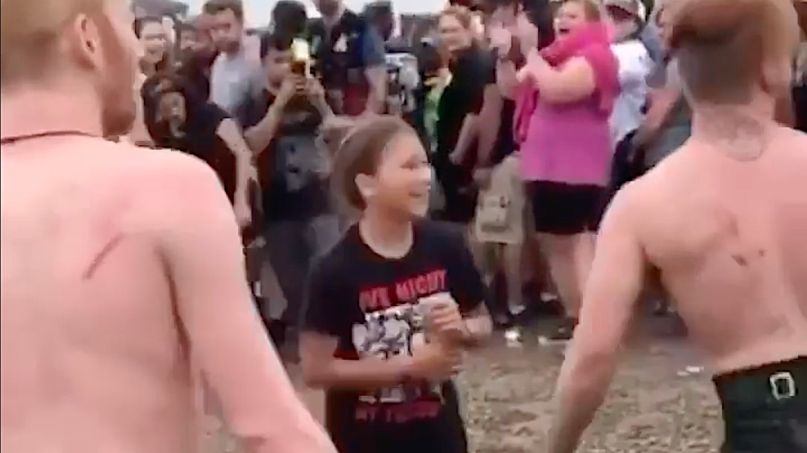 As metal shows and festivals continue to be postponed or canceled due to the coronavirus pandemic, we can only reminisce on the days when we could smash into one another in a sweaty circle pit. A new viral video of a young girl learning how to mosh at a metal fest serves as a joyous reminder of what live music fans have been missing.

As Killswitch Engage play the Disarm the Descent track “In Due Time” at an undetermined metal fest, the small girl takes advantage of a lull in the circle pit to learn the ways of the mosh. That sounds scary, knowing how violent a heavy metal mosh can get. But fortunately the thrashers show some respect, playfully bouncing around and keeping things safe for the rookie mosher.

The footage went viral after it was posted on a personal Facebook profile earlier this week and shared over 25,000 times. It’s certainly a charming example of the shared experience of a concert, as we all pine for their return.

Some medical experts project live music won’t be back until fall 2021 at the earliest. While many spring tour dates and fests have been canceled or postponed, some bands still have shows slated for summer and fall, which are subject to change given the ongoing pandemic.

Artists such as Slipknot’s Corey Taylor expect shows to eventually return, with an initial period of “paranoia” leading to an “explosion of live entertainment” after the pandemic. In the meantime, bands like Deftones and Sepultura have begun hosting recurring livestreams and socially distant performances to interact with fans.

Hopefully sooner than later, we’ll all be able to safely mosh again. Until then, watch the viral video below and bask in the good vibes.