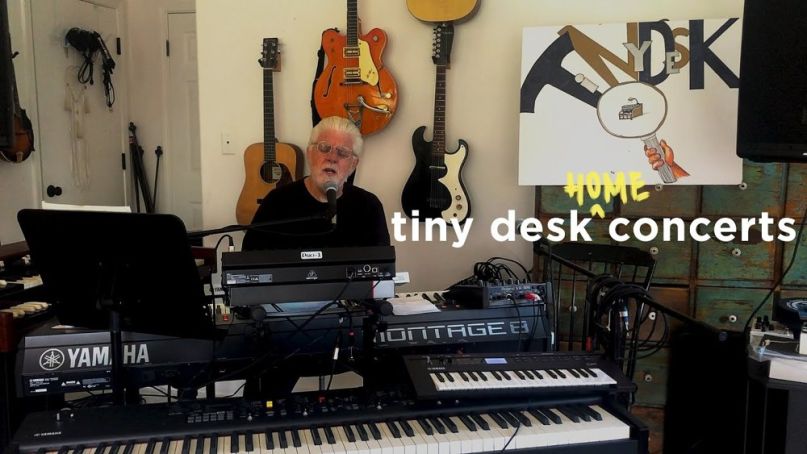 Michael McDonald staged an NPR Tiny Desk (Home) Concert from the safety of self-isolation. He played one song from his solo career and two of his biggest hits as a member of The Doobie Brothers.

McDonald performed from the comfort of his home studio, in front of a Tiny Desk banner he reportedly made himself. He opened with his solo sleeper favorite “Matters of the Heart” from 1993’s Blink of an Eye. Afterwards, he addressed viewers, wishing them health and encouraging them to stay in the house.

The Rock and Roll Hall of Fame inductee introduced The Doobie Brothers section by inviting fans to “sing along at home. I won’t know if you’re singing well or not, because I can’t hear you here.” McDonald then vaulted into “Minute by Minute”, the title track from The Doobie Brothers’ best-known album. He followed that with the band’s biggest hit, “What a Fool Believes”.

McDonald’s bluesy baritone has grown smokier with age, but he hits the notes as effortlessly as he did in his twenties. However, the biggest question of his career remains unanswered: how can this dorky-looking dude create such heartbreakingly soulful sounds? Find out for yourself, and watch his Tiny Desk (Home) Concert below.

As part of The Doobie Brothers, Michael McDonald will be inducted into the 2020 Rock and Roll Hall of Fame Class. The ceremony was delayed over COVID-19 concerns and has been rescheduled for November 7th.

Last year, Michael McDonald and The Doobie Brothers reunited for a massive tour. Many dates have been pushed back during the pandemic, but tickets for those performances can be found here.

Setlist:
Matters of the Heart
Minute by Minute
What a Fool Believes