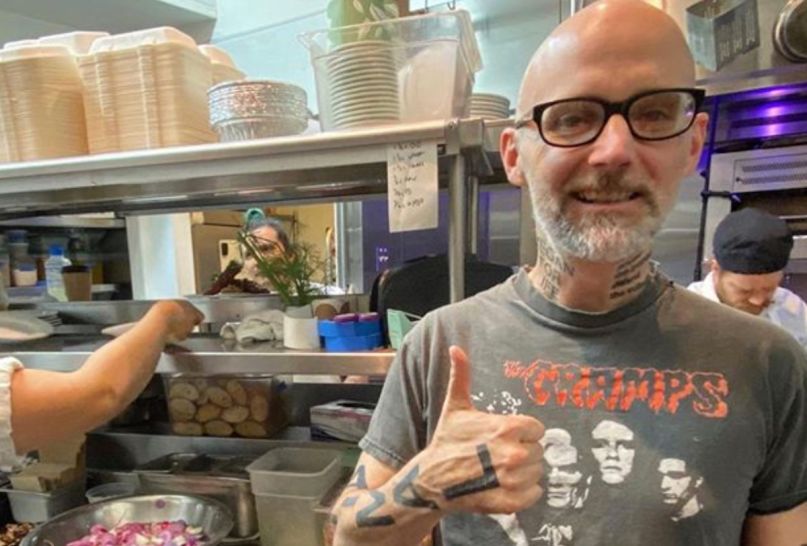 Small businesses are struggling mightily right now, with many being forced to shutter their doors due to the economic shutdown. Moby’s vegan bistro in Los Angeles, Little Pine, hasn’t been immune, but now the electronic musician is taking a lot of heat for how he went about laying off the restaurant’s staff.

A report from Eater notes that Little Pine shut down its dining room on March 15th following the city-wide shelter-in-place orders. Despite being promised two weeks of sick pay and a payout of accrued vacation times, employees claim Moby continuously failed to answer their questions about things like health care and their future employment. As the blowback ramped up online, it wasn’t until April 14th that Moby finally reached out in a private email explaining that Little Pine was on “indefinite hiatus” and wouldn’t be offering takeout or delivery. Even worse, the employee healthcare coverage had been canceled.

Little Pine is (was?) a non-profit business that gave its proceeds to animal rights groups. However, considering Moby’s status as a multimillionaire philanthropic celebrity with “protect the innocent. defend the vulnerable.” tattooed on his next, ex-employees were angered by how he handled the restaurant’s closure. They were only informed mid-April that their health insurance was gone, and they said it took “weeks” to sort out checks for accrued vacation time.

“I am coverage-less in the middle of a global pandemic, because my health care has been canceled by a multimillionaire,” one former employee told Eater.

In his email to ex-employees, Moby claimed he was “dealing with quite a lot of personal issues” when Little Pine first shut down, which he used as an excuse for failing to “address your concerns.” He went on to say he would no longer “be able to subsidize [the restaurant] moving forward” and expressed remorse that he “hasn’t been able to do more to mitigate the financial hardship” of his employees. He concluded, “I fully accept that the shut down could’ve been handled much better, and for that I take responsibility, and again apologize.”

“little pine, like most restaurants during this crisis, is in serious financial trouble. We have tried to do the right thing, and paid our managers and paid our employees and paid our vendors and paid our insurance, etc. and we are, again like most restaurants, seriously in debt… Now not only have we been forced to shut down, but we are on the verge of bankruptcy, while being viciously attacked by countless strangers. Honestly, after desperately trying to do the right thing and going seriously into debt, the vicious hostility makes us want to just shut the restaurant down.”

However, numerous fired staffers say they were the ones commenting on Little Pine’s posts, for which they were subsequently blocked and had their comments deleted. “You know what you did wrong,” read one post from a pastry chef named Amy. “You left a staff of ~30 folks — staff that worked hard every day to help give YOU a successful restaurant — out on their ass. Promised two weeks of sick pay and then changed your mind? Then terminated all of us with not an ounce of compassion.”

She added, “You care so little about people that you take photos of animals without permission (including mine! just MOMENTS before you fired me) and post them onto this account for clout and likes.” Another former Little Pine worker said she’d already lost respect for Moby “after the disgusting Natalie Portman scandal,”  but this situation confirmed “not all people who love to have a philanthropic reputation are, in fact, good people.”

Moby’s representatives provided Eater with a statement, which you can read below followed by some of the social media posts from ex-Little Pine employees.

“Like so many restaurants around the world, little pine has been been forced to shut down in the wake of the coronavirus pandemic. There’s no easy way to close a business, and I know that a lot of our former staff are very understandably angry and upset. But in closing little pine I absolutely made sure to pay all employee and management salaries and bonuses, vendor costs and taxes and utilities out of pocket. Everything about this global crisis is unprecedented, and I’m sure I could have handled our shut down better. I have so much respect and appreciation for the people who’ve worked at little pine, and I truly apologize for the pain this process has caused.”

Meanwhile, Moby is set to release a new album, All Visible Objects, on May 15th.

from an employee that was blocked after commenting pic.twitter.com/Fb0Ik59tyr