Watch Exclusive Clips of Metallica, Megadeth, and More from the Thrash Metal Film Murder in the Front Row 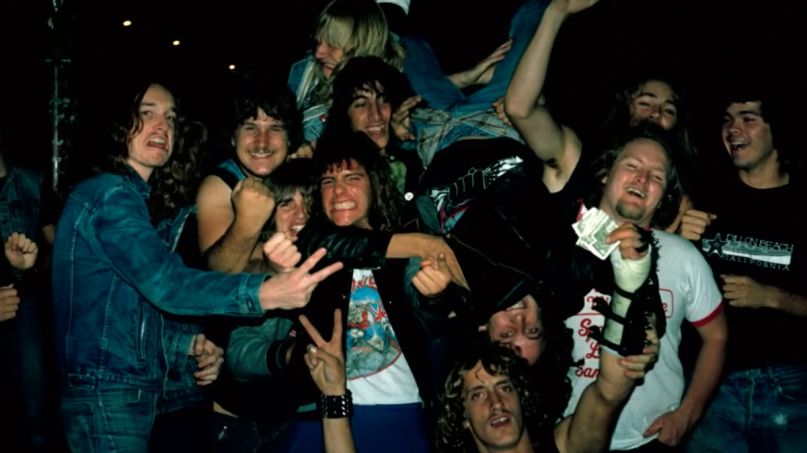 Directed by Adam Dubin, the film chronicles the burgeoning years of the Bay Area scene and the kinetic growth of its many bands. Murder in the Front Row weaves together interviews, photography, animation, and commentary to tell the story of thrash’s most vibrant and influential community.

“I’m very happy that Murder in the Front Row is coming out on download and DVD on April 24th,” Dubin says. “While it was an amazing experience for me to attend screenings around the world and interact with music fans, I’ve always been aware that most people will see the movie online. One of the most interesting things that I observed at screenings was metalhead parents bringing their kids to educate them on what the thrash scene was like back in the day. It was like a shared history lesson. So I’m glad that the movie will continue to educate people around the world.”

The two clips feature interviews with some of the film’s biggest voices, such as Megadeth’s Dave Mustaine and Metallica’s James Hetfield and Lars Ulrich, who offer up juicy anecdotes from the past. For instance, Mustaine discusses the blood pact he made with  Exodus singer Paul Baloff, who’d go on to dub the band’s debut album Bonded By Blood.

“I probably should have thought who I was doing it with,” Mustaine laughs.

It’s a taste of what’s to come when the full film is released digitally and on DVD this Friday. Dubin gathered the key players from the Bay Area scene, who all seem affable and open to discussing their relatively sordid past of mischief, partying, and riffage.

The film received praise following screenings around the world for its thorough access to first-person sources. In a time when metalheads are relegated to concert films, livestreams, and documentaries, Dubin’s film arrives with the eyes and ears of the metal community craving stimulation.

Dubin adds, “It is an especially poignant time for Murder in the Front Row to be available because live music has been sidelined by safety concerns. Thrash metal as practiced by Metallica, Megadeth, Testament, Exodus and others is a very live experience. The photographs in Murder in the Front Row attest to the energy of the live shows and the bands all built their followings through playing live. So until we can all get back to enjoying music together, it will be fun to relive the history with Murder in the Front Row.”

Fittingly, metalhead comedian Brian Posehn narrates the documentary, rounding out an impressive list of metal luminaries for what might be the definitive film on the Bay Area scene and thrash in general.

Watch the two clips below. Pre-order the documentary on DVD via MVD Entertainment and here.